The tire issues for Joe Gibbs Racing have continued tonight, as team owner Joe Gibbs’ golf cart veered towards a pit road area wall after experiencing a front right tire failure.
“The important thing is that everybody’s fine”, an unharmed but visibly annoyed Coach Gibbs said upon exiting his golf cart and examining the damage.  “But we obviously have some sort of issue going on here.  Either we’ve been a bit too aggressive with our setups—recreational vehicles included—or Goodyear doesn’t like us again.” 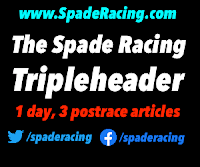 Gibbs’ golf cart, being used at the time to go from Erik Jones’ hauler to the 19 car’s pit stall, showed numerous scratches on the right side, rubbing off several of the dozens of logos of team sponsors.  The golf cart’s driver was also forced to go to the infield medical center, despite complaining of nothing more than “…a slightly bruised finger nail”.
The Gibbs-owned cars experienced tire issues during yesterday’s Xfinity Series race (one of seventeen with Alsco as a title sponsor) and the first car to wreck in tonight’s 600-miler was Erik Jones.  This was followed soon afterward by a crash by Gibbs-affiliate team driver Matt DiBenn, DeBine…Matty D, which was in turn followed by a wall-brush by the Gibbs-owned 19 car of Martin Truex Jr.
“I was on my way back to the 19 team’s pit stall to give the guys a quick pep talk”, Gibbs said after the golf cart incident.  “I knew it was gonna be really tough on Martin (Truex Jr.) with this being one of his home tracks and all.”
The Gibbs team is exploring a number of options for the rest of tonight’s race, including coating the right sides of their cars with Crisco to let them glide off the walls, and getting fellow driver Ryan Newman to simply block them from hitting the walls.


For their part, tire supplier Goodyear stated that there was nothing wrong with the tires examined after the incidents (including the golf cart tire), and pointed out that not a single Goodyear tire failed in today’s Indy 500.
Posted by Mike Mackler at 7:29 PM