As we approach a season full of promise (of Jeff Gordon retrospectives and series sponsor questions) it’s time to make predictions.  Pointless, uneducated predictions.  Here they are, haiku-style, from the bottom to the top of the points (full-time drivers/teams only)
*--number to be determined as of this writing

83* JJ Yeley (BKR)—Burger King, Dr. Pepper
BKR Roulette:
Who will get to race this week?
And who will get screwed?

98 Josh Wise (PPR)—unknown
A meme has become
A legitimate sponsor
Much sponsorship.  Wow.

13 Casey Mears (Germain)—Geico, every damn oil change place for some reason
It’s not the driver
Or the owner or sponsor
Its Geico’s OWNER

17 Ricky Stenhouse Jr. (RFR)—Fastenal, Zest, Cargill, Fifth Third Bank, NOS
So many sponsors
So much promise; expectations
Wins?  Um, not so much

9 Sam Hornish Jr. (RPM)—Twisted Tea, ???
Will there be sponsors?
Will they be competitive?
Will Hornish spin?  Yes.

55 Brian Vickers (MWR)—Aaron’s
Two subs, then Brian
Wins would be great for them, but
I just hope he’s healed

10 Danica Patrick (SHR)—GoDaddy, Aspen Dental, TaxACT
Its a contract year
Time to deliver or its
“Time for a family”

51 Justin Allgaier (HScott)—Brandt, Auto-Owners Insurance
Harry’s on his own
Full speed ahead, but wait—is
James Finch coming back?

18 Kyle Busch (JGR)—M&M’s, Interstate Batteries
Here’s what I expect
“I’m here so I won’t get fined,
Go talk to my wife”

11 Denny Hamlin (JGR)—FedEx, Sport Clips
Don’t say, “Hey Denny,
You’ve got something in your eye!”
Or he’ll Freight your Ground

42 Kyle Larson (Ganassi)—Target
Kyle’s breakout year?
How about the equipment?
Help us out, Felix

14 Tony Stewart (SHR)—Bass Pro Shops, Mobil 1, Rush Truck Centers, Code 3
It’s back to racing
Nobody is happier
For that then Tony

88 Dale Earnhardt Jr. (HMS)—Nationwide, Diet Dew, Kelley Blue Book
No more Guard for Dale
Nationwide is on his side
But is luck?  We’ll see…

20 Matt Kenseth (JGR)—Dollar General, DeWalt
What do you prefer
To hear butchered on tv:
“Kenseths” or “Kenzett”?

After digesting the somewhat surprising news that Jeff Gordon will be retiring from full-time Cup competition after the 2015 season, Nascar fans have turned their attention towards preparing for the coming deluge of Jeff Gordon coverage.
“I’m sure we’ll hear it shoehorned into 24 Hours of Daytona coverage”, said local fan Scott Wilson.  “And before the Daytona 500, someone will try and track down Nelly and find out why he name-checked Jeff in his song.  I’m sure everyone will be seeing rainbows and flames in their sleep by the time the Chase rolls around.”
“I remember Richard Petty’s Fan Appreciation Tour, but that was well before internet puff-pieces, Twitter comments from people who haven’t seen Jeff in decades, and multiple cable channels to do multiple stories on the original Rainbow Warriors”, said longtime fan Steve Gallagher.  “Oh, and just wait till NBC takes over coverage this year—how many times do you think they’ll ask Jeff Burton about that stupid fight they had a few years ago?”
Gordon, the most-influential (and arguably most-successful) driver in his prime, has remained competitive in his later years, meaning that every time he even sniffs the lead, announcers will be gushing about trying to win “just one more race.”
“I’ve been a big Jeff Gordon fan for years, but I’m already getting myself ready for when Mike Joy asks DW & Larry Mac ‘…what this win would mean for Jeff’ 20 laps into a race”, said Gordon supporter Meg Smith.  “I’ve already cleared space in my den for all 38 diets cars that are sure to come out, and I’m prepared to get a dozen emails a day about getting limited-edition hats.”
Gordon, for his part, has given no hint what his plans are post-retirement.
“I plan to spend more time with my family, that’s a given”, Gordon said at his retirement press conference, “but I plan to stay involved with racing as well.  Specifically, I know I’ll have to block-off time every week to do interviews for retrospectives put out by Nascar Films, and deal with the daily questions of if I’m going to run the Indy 500 now.

In yesterday’s AFC Championship game, the New England Patriots’ decisive win over the Indianapolis Colts was tarnished by accusations of cheating—namely that the Pats were intentionally deflating their allotment of footballs to increase catchability.  With all the allegations of cheating around the NFL (well, mostly just around the Pats, Cowboys and Saints) people may have forgotten Nascar’s occasional (well, constant) issues with cheating.  Here’s a look back at some of the more-memorable scandals that have been forgotten.

1938-1948—a group of moonshiners are caught, arrested, and serve their sentence, eventually enlisting in the military and returning to civilian life in blue-collar jobs.  The crew is roundly criticized for ruining Nascar’s narrative.

1964—Richard Petty makes a tactical error by lapping the field, bringing attention to his 853 cu. in. engine.

1972—Winston manages to promote its product through Nascar, despite it causing cancer, emphysema, and birth defects.

1981—Bobby Allison goes an entire day without cursing out anybody, resulting in a 50-point penalty (Conduct Detrimental to a Curmudgeon).

1984—Air Force One is forced to start from the back of the pack after arriving for the Firecracker 400 nearly an hour late.

1990—A not-quite-legal engine manifold causes Rick Wilson’s engine to explode in the latter stages of the Daytona 500, thus giving Derrick Cope a career.

1994—Geoff(rey) Bodine has his entire season stricken from the record books due to using Hoosier Tires on a number of race tracks located outside of Indiana.

2001—Casey Atwood is allowed to have a Cup career.

2012—Jimmie Johnson, a master of preparation and mental focus, whose professional life revolves around racing, claims to know nothing about what his crew chief is doing.

This WOULD Explain a Lot 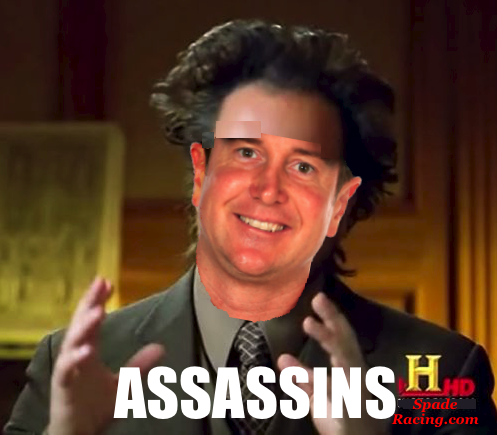 January is when Hollywood takes all its relatively crummy movies and dumps them into theaters, hoping that people will see them in a cabin-fever-induced frenzy.  Here’s a few new movies with a Nascar-bent.

Paddington—A look inside how Fox and NBC will fill time during rain delays without Kenny Wallace.

The Wedding Ringer—A group of Nascar fans look at the photos from driver weddings, asking themselves, “why do I care about this?”

Spare Parts—Jack Roush seeks to rebuild his team the only way he knows how—by accusing Toyota teams of stealing his equipment.

The Boy Next Door—The touching, charming, and ultimately sickeningly-sweet story of Danica & that other guy’s relationship.

19 Surefire Signs You're Rick Wilson (if you recognize #4, you're a lock!)

Busty "Stroker Ace" Star Redefines Sexy (is that what I think it is…?)

Do You Agree with Brian France's Handling of Nascar?  Click YES or NO

Earn Respect of Your Garage Using This One Weird Trick
Posted by Mike Mackler at 12:53 PM