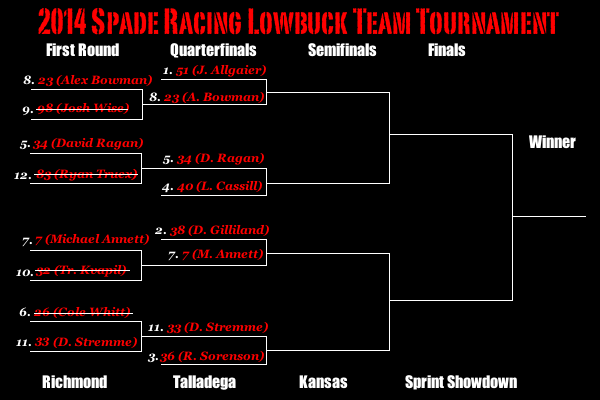 Marcos Ambrose and Casey Mears weren't the only ones duking it out in Richmond--the competitors in the Spade Racing Lowbuck Team Tournament were in a fight to the finish/DNF on the track.  Here's the results from round one:
CLICK HERE FOR THE OVERVIEW
(remember--the top four seeds had first-round byes)

Acting swiftly following tonight's post-race "activities", the Commonwealth of Australia has drafted--and passed--a declaration of war on the dreaded Mears Gang.
"We cannot tolerate any of this aggression on behalf of this dreaded 'Gang'--retribution was our only option", said Australia's Prime Minister Tony Abbott in a prepared statement.  "Rather than let our compatriot Marcos (Ambrose) suffer the blows of this ruffian, we will join him in a full-on military assault, commencing immediately."
Canberra officials were seen deploying numerous fighter jets, battleships, and anti-gecko missiles, although the reasons for the blow-up remain somewhat mysterious.
"If you attack one of us, you attack all of us", a member of Australia's naval forces was heard saying before leaving on his mission.  "I can't tell you exactly what my mission is, but let's just say it involves me, Warren Buffett, and a large jar of vegemite."
It remains unknown just how many members of the "Mears Gang" there actually are, although they are easily identified by their 1950's-style t-shirts.
"We were originally worried about taking out innocent fans who just happened to be wearing 'Mears Gang' apparel", said a spokesman for the Australian army, "but our intelligence shows that no Casey Mears merchandise has been sold since 2007, so we should be OK."
The Mears Gang has not been able to be reached for comment, although Rick and Roger Mears were seen tunneling into a bunker deep in the Southern California desert.
"I'm glad to see that my country-mates have my back", Ambrose said, "and I'll be glad to join them next week, seeing as how I'll probably be getting suspended.  Apparently it's 'Boys Have At It', but when a MAN has at it, they get sidelined."
Posted by Mike Mackler at 10:56 PM

("News" and Notes is taking a brief hiatus so that we* can bring you this multi-week tournament.      *--yeah, it's still just me) 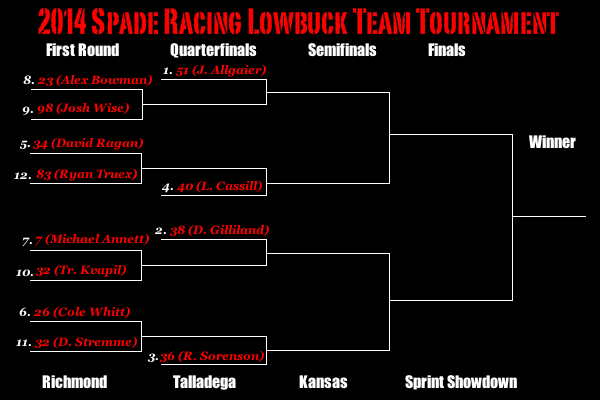 While the best in Nascar are competing for wins, there's teams who are just happy to notch a top-25.  They are the independents, the start-ups, the guys trying to become the next Germain Racing or Furniture Row Motorsports.  So where's THEIR coverage?  Where's THEIR mispronounced drivers' names by Darrell Waltrip?  Where's THEIR sponsors that people have actually heard of?  Well, they're…not here.  But here's the next best thing:  A bracket-style tournament!!!
Here's the rules:

--12 teams--all of which have attempted all eight races so far this season--will compete in a single-elimination head-to-head tournament over the next four weeks, with the top four teams entered earning byes for the first round (this week).
--First Round is this weekend at Richmond.  The Quarterfinals are next week at Talladega.  The Semifinals are after that in Kansas.  Finally, the Finals will take place in the Sprint Showdown.
--Seeding is done by the team's current place in the Owners' Points.
--It's pretty easy to win--simply finish ahead of your competition for that week.
--Points are accrued by the team itself, not by the driver (in case multiple drivers come into play--Circle Sport, I'm looking in YOUR direction).
--The winner wins a trophy provided by Spade Racing (note--winner must contact me through Facebook, and must not simply be asking if my refrigerator is running). 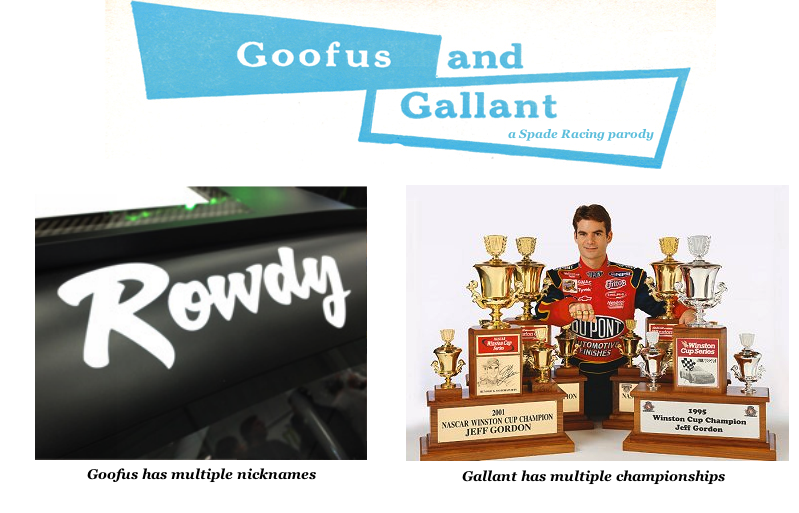 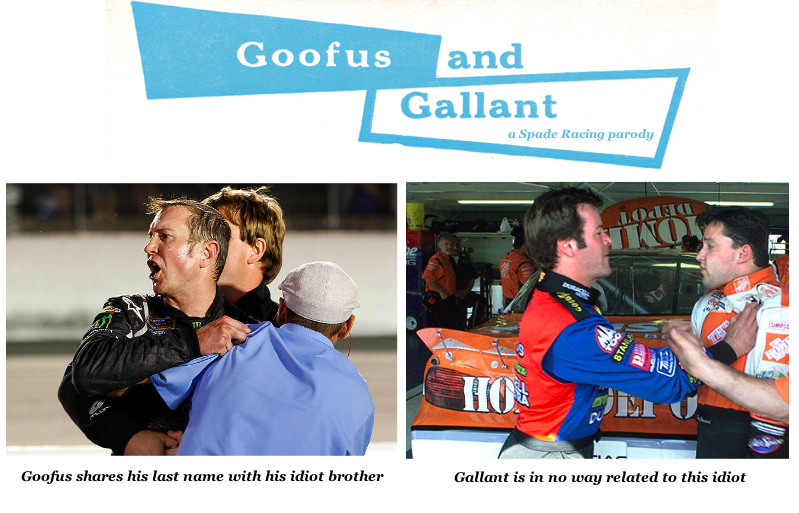 The Dandiest Interview with Kyle Busch

Kyle Busch seems to have no problem dropping down to the lower series in order to defeat some of the sport's young, rising talent.  But he's doing so in JGR equipment, isn't that kind of an unfair fight?  I went down to KBM headquarters to investigate, and asked him, why doesn't he agree to take on one of the sport's underfunded prospects in equally-matched equipment?  Here was his response:

Kyle Busch: "Lemme tell you about who deserves a shot at me--I'm the guy gunning for 200 wins!  I oughta know!  Y'know, I've been sizing up guys since this season started, and the guy who I think has EARNED a shot at me, Norm Benning, I think you're a heck of a driver, you're a great technician on the track, you're a jam-up guy--"

Me: "Well, he is a great driver, but for goodness sakes, at 40 years differenc--"

KB: "Who are YOU to doubt Norm Benning?  This guy's a serious professional."

KB: "How about Shep Morgan?"

KB: "He's a Cup driver of the highest magnitude!"

Off to The Off Week

After an exciting night of racing at Darlington, Nascar heads into its traditional Eastern weekend off-week.  Here's what some of the superstars of the sport are planning to do with their free-time:

Kevin Harvick--Torture self for not making "Fried Chicken and Beer" reference in Victory Lane.

Jeff Gordon--……………whoops, sorry, got started a little late there.

Kyle Larson--Wonder why no one calls him about taking the historic car number of Kyle Petty.
Posted by Mike Mackler at 10:58 PM

--Remember that Saturday's Cup race has a pretty early start--6pm EST.  Well, unless it rains.  Again.

--Meanwhile, the Nationwide Series race is co-sponsored by Sport Clips and the VFW.  Because of this, there'll be an all-you-can-eat pancake breakfast held before the race, and a 50/50 raffle drawing after the green flag.

--In honor of Nascar's Green initiative, Jayski posted that teams got up to 217mpg at the Michigan tire test.  217 Miles Per Gallon--that'll take fuel strategy right out of the sport!

--ESPN's "Burning Questions" series posed a popular debate this past week--who would you rather have to start a Cup team from the ground up, Kyle Larson or Chase Elliott?  The answer that *I* would have given would have been, "I dunno, but that kind of explains why Austin Dillon still has unsponsored races this year.

--At Daytona this summer Brian Vickers will run a Florida State paint scheme.  Who knew that Aaron's sold shoes?
Posted by Mike Mackler at 12:39 PM

After a number of bad-luck issues to start the 2014 season (albeit with a win in his pocket), Kevin Harvick and the 4 team seem to be finding new ways to DNF.  Here's a look at what the team is planning for the rest of the season:

--Guy parachutes into the car again, only THIS time, it's during a race.

--Keelan stows away in the trunk with a domesticated chimp.

--Blocked-in on pit road after the first-ever attempt at a three-tire stop.

--A piece of his eye gets lodged in some metal.

--Front grill gets clogged with pollutants (Dover only).

With rain pouring down on Texas Motor Speedway, it's a good thing that Nascar has a backup plan--take the show to the Superdome and turn it into a wrestling program!  Here's a look at tonight's scheduled events:

Sunday Night Tepid Humidity Matches
Jamie Dick "Out" vs. James "Head for the Mountains of" Buescher
"Cousin" Chris Buescher vs. "Daytona" Trevor Bayne--a former Roush Racing Lumberjack Match, with stars from the past acting as "lumberjacks" around the ring--Ted Musgrave!  Danny O'Quinn!  Kevin Lepage!  (and many more)

--Well, they're calling for rain AGAIN this weekend at the track.  I'm really starting to wonder if Darrell Waltrip's "Vortex Theory" is actually working in reverse, DRAWING rain towards where racing is happening.

--Derrike Cope just got married.  Well, all us single men just moved up a slot on the "Most Eligible Bachelor" list.

--It looks like Gene Haas's F1 team is going to become a reality.  Let the uninformed "Danica's going to F1" comments begin!

--Anybody else wonder why us Nascar fans focus so much on TV ratings?  I mean, if the ratings for Houston Astros games are down 33%, do you think that the other two fans really care?

--Does the new Chase format make winning more important?  Yes, in relation to the championship.  But its not like drivers WEREN'T TRYING beforehand.  Well, besides Dave Blaney. 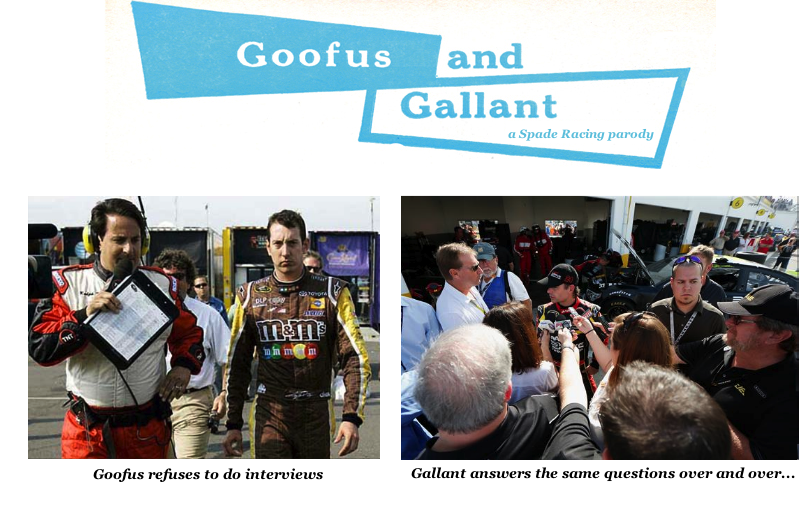 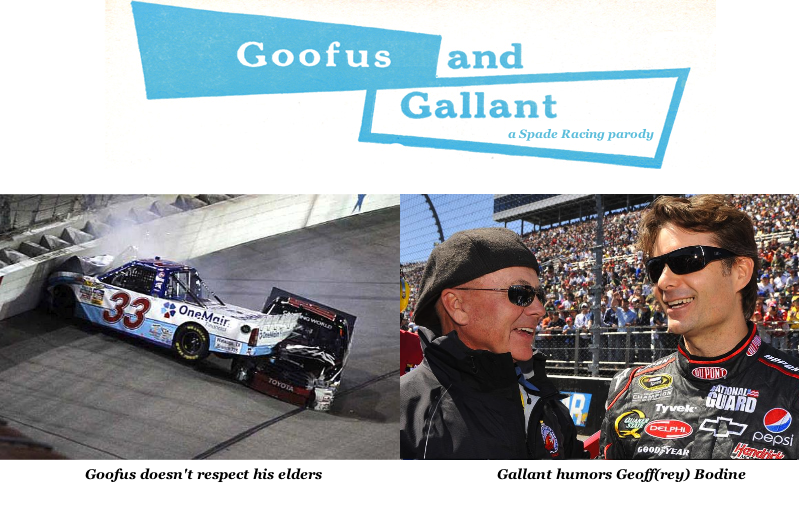