With a defending Sprint Cup champion already posting multiple wins, the sport’s only female driver showing solid consistency, and its “comeback kid” winning today at Richmond, Stewart-Haas Racing has shown itself to be the most-dominate team in the sport, with all three cars showing improvement.
“This is a team win”, Kurt Busch said from victory lane.  “To see where this team has come from, to where all three drivers are doing as well as we are, it just goes to show you how much focus we have on a full-team effort here.”
Kevin Harvick, driver of the 4 car, has been nearly unbeatable this year.  Kurt Busch, in the 41 car, has come back from an early-season suspension to post his first win after several top-5 finishes.  And even Danica Patrick, in the 10 car, has posted a number of top-10s while cutting down on DNFs.
“I’m really proud with what we’re doing here”, said team owner Gene Haas.  “It’s one thing to have a winning car, but to have all three competing for wins, that really makes all the work worthwhile.
“I think this’ll give us the confidence we need to put another team out there on the track—in Formula 1 of course.”


Team co-owner Tony Stewart was also pleased, throwing his equipment in the team trailer in celebration.
Posted by Mike Mackler
Email ThisBlogThis!Share to TwitterShare to FacebookShare to Pinterest

—Remember that this is a Saturday Night race…unless the weather pushes it to a Sunday race.

—Michael Waltrip steps into the 55 car next weekend at Talladega, thus continuing his retirement tour, dubbed the “Why Didn’t You Retire Five Years Ago?” Tour.

—Richmond is one of three short-tracks on the circuit.  Fans often wonder why there aren’t more, since they tend to produce some of the best racing around.  Well, there were many tracks built in the past twenty years, mostly by people who apparently hated fun.

—Yeah, the Truck Series is still on break.

—It’s pretty rare that Roush Fenway Racing takes on shaky sponsors, so I’m guessing the sponsorship of Bubba Wallace tonight is the first time Bleacher Report will actually pay somebody.

—Hats off to Johanna Long, who returns to the Xfinity Series in the #03 car, paying homage to Angela’s Motorsports.
Posted by Mike Mackler
Email ThisBlogThis!Share to TwitterShare to FacebookShare to Pinterest 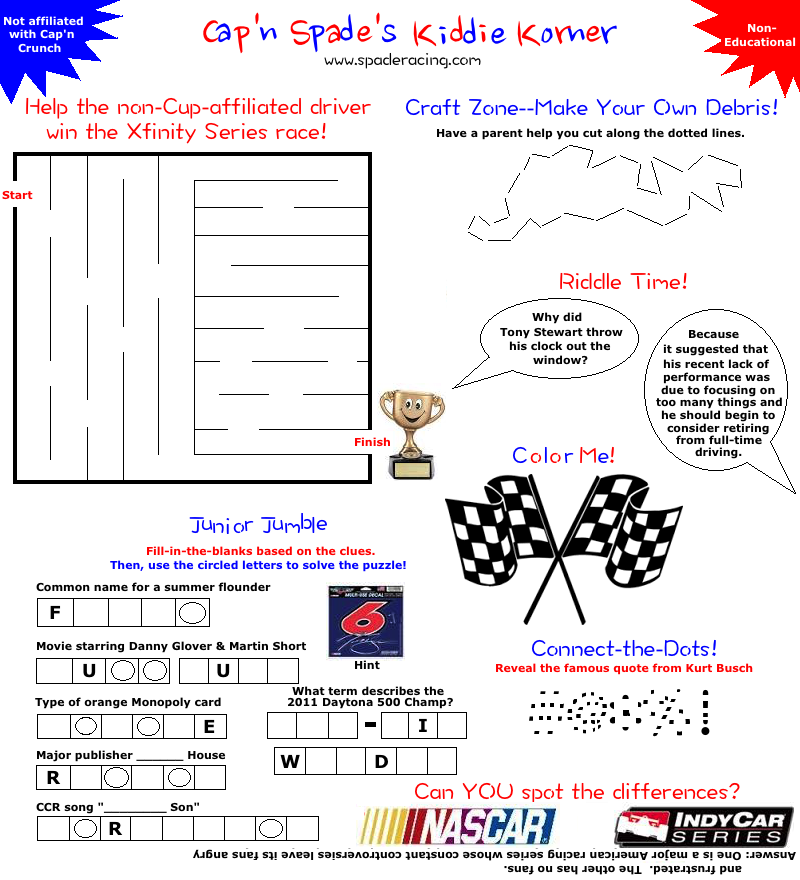 Things We Learned During The Red Flag

—Kyle Larson can cross his eyes.

—If you wreck your car, you can’t work on it during a rain delay—even if you have the anarchy “A” on your hood.

—When you need to fill time, interview BK Racing and hope that JJ Yeley’s in a touchy-feely-mood.

—If the race restarts tomorrow, it’ll air on your local Fox affiliate at 11amEST, thus making it so nobody can watch it.

—People STILL don’t get that you can’t run Nascar in rain tires.

—Apparently that taco thing was a big deal.

—Switching to IndyCar, it took about 10 seconds for Robin Miller to remind the world why people hate him.
Posted by Mike Mackler
Email ThisBlogThis!Share to TwitterShare to FacebookShare to Pinterest

—Unfortunately, it’s looking like this weekend is the best chance yet for Rain to qualify for the Chase.

—Bill Goldberg is doing driver intros on Sunday.  No word on if Hugh Morrus will be introducing him.

—Michael Annett’s car will be advertising Pilot’s “PhilMor” coffee program this weekend.  Over/under on the number of “Call for Phillip Morris” jokes that nobody gets is at 3.5.

—Sure, Dale’s Pale Ale is sponsoring JR Motorsports, but unless Dale Jarrett brings back HIS team, who else were they gonna sponsor?
Posted by Mike Mackler
Email ThisBlogThis!Share to TwitterShare to FacebookShare to Pinterest

Many Nascar fans have questions about the recent controversy of teams intentionally “bleeding” their tires to achieve a lower air pressure—that’s where I come in.

What exactly is “bleeding”?  Drilling tiny holes into the rubber to let a slight amount of air out over a prolonged period of time, causing the tire itself immense pain and suffering.

How is it achieved?  The holes drilled are almost imperceptible, or at least imperceptible to Nascar officials who spend hours making sure a spoiler isn’t 1/144th of an inch off.

What safety issues could this cause?  Damaging the integrity of the tire could cause frequent blowouts, which would put the lives of the drivers, crew, and fans at great danger—oh, and competitive balance might be upset.

Doesn’t that make it hypocritical for teams to make their cars more-dangerous when they’re clamoring for more SAFER barriers?  Yes.
Posted by Mike Mackler
Email ThisBlogThis!Share to TwitterShare to FacebookShare to Pinterest

Kevin Harvick was unable to pull out the win tonight in the Duck Commander 500, but he did make his team owner Tony Stewart proud by whining about another driver blocking near the end of the race.
"You might want to remind the mother f----- what happened to the 22 when he blocked.”, Harvick was heard saying over the radio, specifically complaining about Jimmie Johnson, who was in the lead at the time.  Harvick had bumped the 22 car of Joey Logano out of the groove several laps earlier for daring to try and protect his position near the front.
“I’m really glad to see Kevin maintain this team’s proud tradition of complaining when other drivers are in our way”, said team co-owner Tony Stewart.  “Whether it’s Brian Vickers less than a car length ahead of me at a road course, a Front Row Motorsports guy running next to Danica (Patrick), or a reporter trying to interview Kurt (Busch), we don’t let anyone stand in our way.”
Harvick has already qualified for the Chase for the Cup, but will not lose focus on individual races, nor individual drivers ahead of him on-track.


“It’s all about getting to the front”, Harvick said post-race.  “And I’m not going to let ANYONE get in my way until I’m in first place—at which point anybody who tries to tap me will get attacked post-race.”
Posted by Mike Mackler
Email ThisBlogThis!Share to TwitterShare to FacebookShare to Pinterest

—Some good news out of the MWR camp—they’ve signed-up Maxwell House as a sponsor of Clint Bowyer.

—Some bad news out of the MWR camp—they’ve signed-up Maxwell House as a sponsor of Michael Waltrip.

—While Darrell Wallace Jr. still doesn’t have solid sponsorship, he says that Roush-Fenway (and Ford) have committed to running him full-time in Xfinity this year.  Pretty ironic as the “redneck fans” seem to have embraced Bubba wholeheartedly, while Madison Avenue keeps their distance…

—The Stewart-Haas Dynamic Duo of Kurt Busch and Kevin Harvick can’t be stopped, as they share the front row for tomorrow’s race.  They’re like Cole Trickle and Russ Wheeler, except they actually get along.
Posted by Mike Mackler
Email ThisBlogThis!Share to TwitterShare to FacebookShare to Pinterest 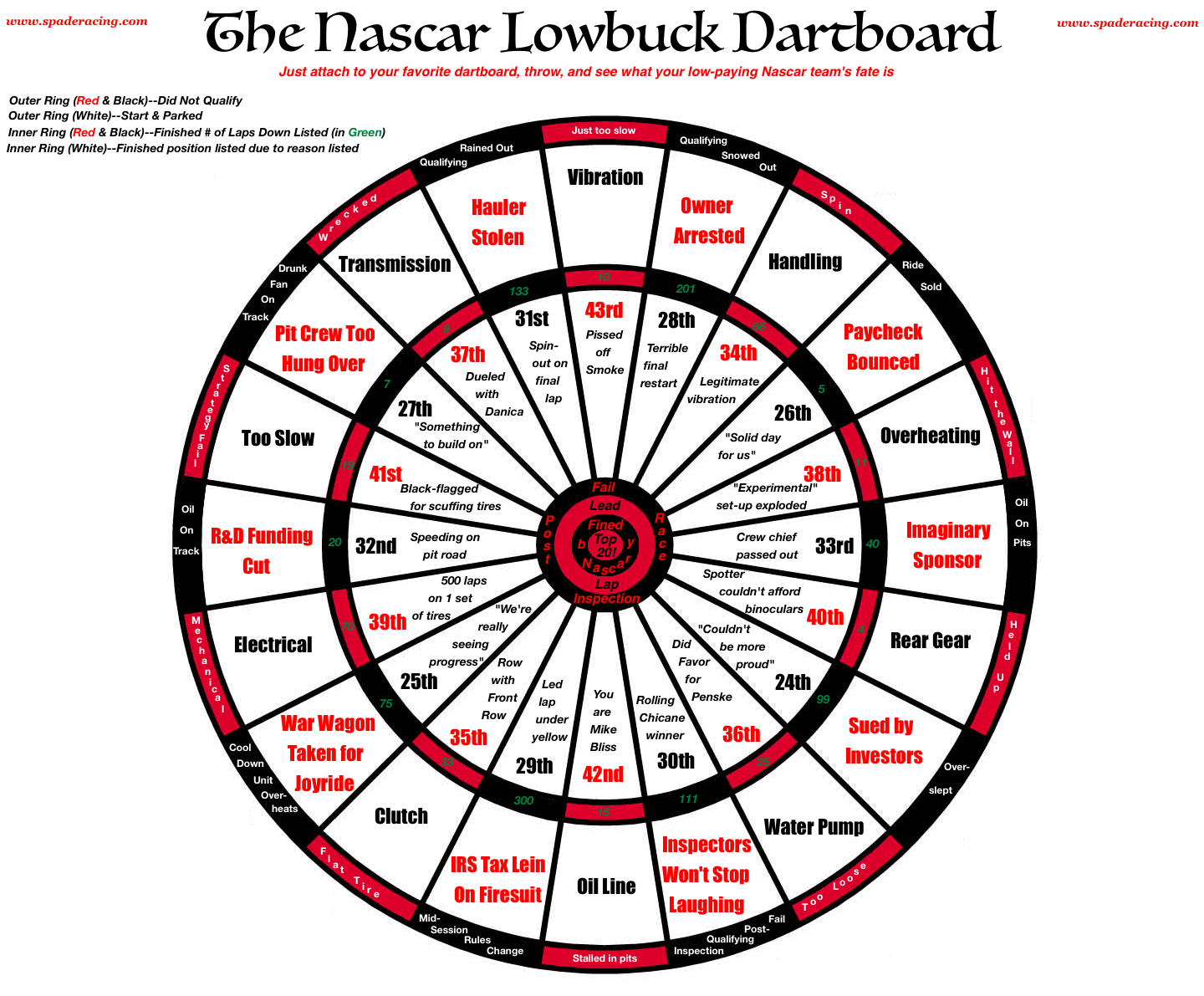 I Guess ESPN.com's New Layout Was Designed by Brad Keselowski 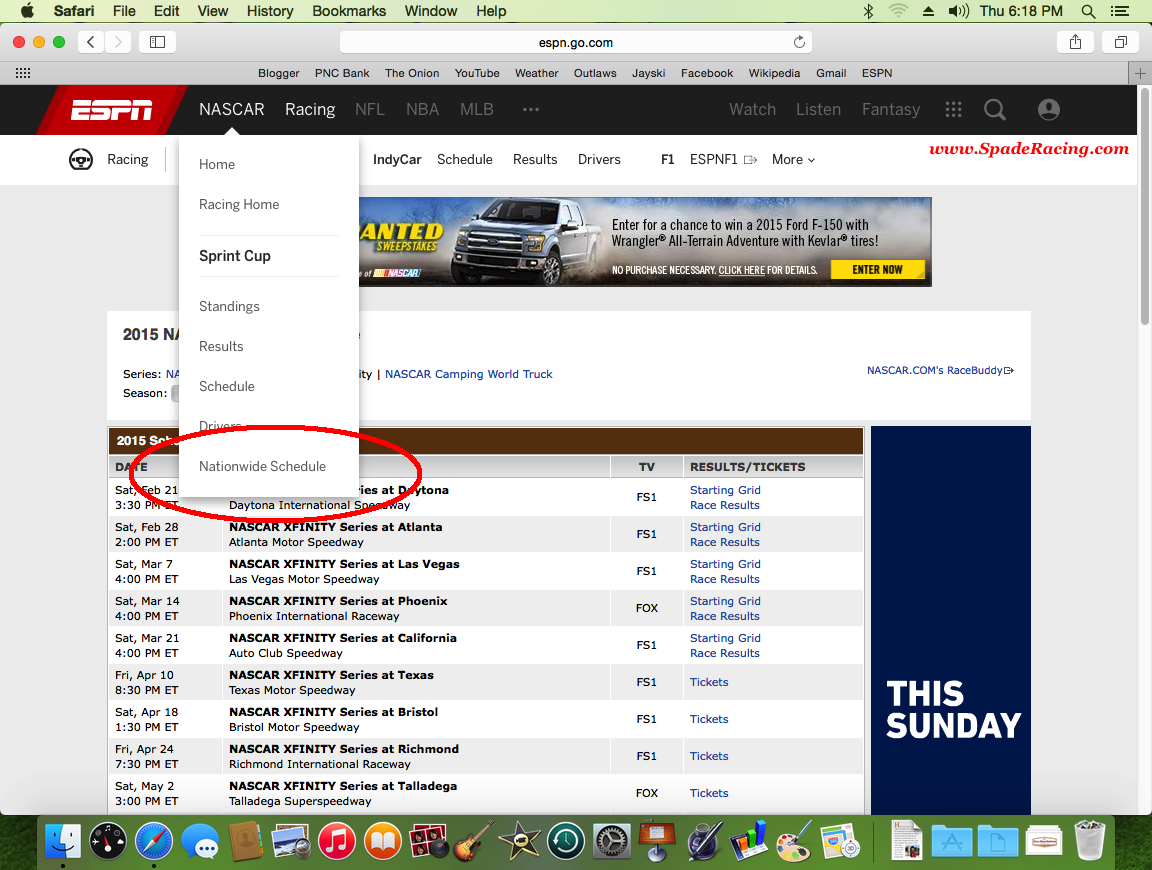