Its been said that good (and bad) things come in threes.  Well, there’s no better way to kick off the 2023 Nascar Cup season than by exploiting that random synchronicity!  Listed below is the Spade Racing OFFICIAL 2023 predicted finishing order for the regular season, handily sorted into groups of threes.

R=Rookie of the Year candidate

THE DOMINATORS--Three drivers who will dominate the regular season. 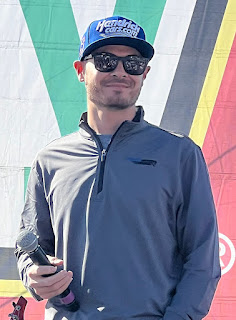 5 Hendrick KYLE LARSON (HendrickCars, Valvoline)—he’s got the team, the car, the talent, and the stability of a long-term contract.  Now he just needs Rick Hendrick to conclude those tense sponsorship negotiations with Rick Hendrick.

22 Penske JOEY LOGANO (Shell Pennzoil, AAA)—Joey and the 22 crew pick up where they left off with multiple wins, a shot at the championship, and plenty of irritated competitors and fans.

9 Hendrick CHASE ELLIOTT (Napa, Hooters)—Somehow he’ll be solidly in the top-five in points mid-season and some people will still be positing that its somehow a disappointment—including Chase.

11 JGR DENNY HAMLIN (FedEx, SportClips)—An early win, a spring lull, then coming on strong in the summer.  He’s just like Tony Stewart—heck, he even owns a race team!

20 JGR CHRISTOPHER BELL (Stanley et al, Rheem)—C.Bell proves his 2022 was not a fluke by posting a slew of top-five race finishes.  Too bad he doesn’t have a better nickname than “C.Bell”…yet.

45 23XI TYLER REDDICK (Monster, McDonalds)—A slow(ish) start to the season has people wondering if he can adjust to his new ride, but then he posts a bunch of wins.  Bell & Reddick—they’re always in contention together!

SUCCESSFUL YET MILDLY DISAPPOINTING—Very good, but not great, regular seasons 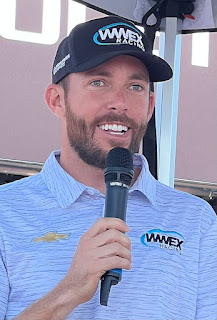 1 Trackhouse ROSS CHASTAIN (Worldwide Express, AdventHealth)—Ross finds out that you win one year, you’re expected to dominate the following year.  He might not post more than a win or two in 2023’s regular season, but I don’t see him going back to the farm anytime soon.

24 Hendrick WILLIAM BYRON (Axalta, LibertyU)—I don’t know if there’s a more-solid, less-conspicuous contender than William Byron.  He’s always great at winning when he needs to, contending for top-tens on the regular, and avoiding questions about his sponsor.

14 SHR CHASE BRISCOE (Mahindra, HighPoint)—Following up a break out season with a solid one.  And to think, this ride almost went to Kyle Lar—er, maybe don’t think about that.

THE QUIET MEN—They’ll have their wins, but you won’t think of them as contenders

48 Hendrick ALEX BOWMAN (Ally)—Being fourth-worst on your team is usually terrible, but when its the Hendrick Motorsports of the early-2020’s, that’s not a bad thing.  Nor is it bad to have a single sponsor (even if they use hideous colors on their paint schemes). 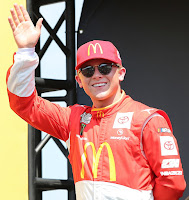 54 JGR TY GIBBS (Interstate, Monster) R—There’ll be a LOT of talk about whether or not he deserves this ride.  There might even be an on-track tangle or two.  But then you’ll look up in August and realize he’s the top driver in points without a win.

4 SHR KEVIN HARVICK (Busch Light, Mobil 1)—Will he retire?  Will he contend?  Will he break his losing streak?  Will Busch Light continue to put out irritating commercials?  (Answers: Yeah, Kinda, No, Obviously)

23 23XI BUBBA WALLACE (McDonalds, DoorDash)—He’ll have a disappointing first half of the season, then start contending, then race his way into the Playoffs.  Next, he’ll be eliminated immediately and pick a fight with someone.  Sunrise, sunset…

99 Trackhouse DANIEL SUAREZ (???, CommScope)—Suarez hasn’t exactly set the world on fire in his Cup career, but he’s still good for contending for the Playoffs despite having a Coke bottle glued to his hand.

8 RCR KYLE BUSCH (Cheddars, Alsco)—Look, its never fun to miss the Playoffs, but Rowdy might just be the odd man out in a year where 17-18 drivers are worthy.  At least we know he won’t be gracious about it.

3 RCR AUSTIN DILLON (Dow, Bass Pro Shops)—He can win, he can contend for top-tens, but he’s still a bit of a stretch to be considered as a “championship contender”.  Too bad the team seems to be completely built around him.

GOOD, BUT NOT GOOD ENOUGH—The “8 win NFL teams” of the Nascar world 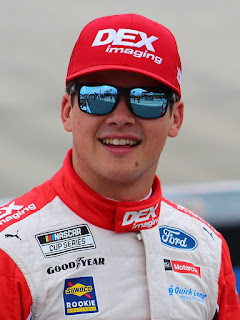 21 Wood Bros. HARRISON BURTON (Motorcraft, DEX)—I think we see Harrison make some improvements this year, but he might still be a bit short of contending.  Oh well, at least he’s an improvement over Paul Menard.

10 SHR ARIC ALMIROLA (Smithfield, Rush)—He came back, but was it worth it?  Ehhh, probably not.  On the plus side, its not like he has to worry about Cole Custer taking his job.

41 SHR RYAN PREECE (Haas, ???)—A significant improvement over this team’s 2022 performance, but it might take till the Playoffs for the 41 to revisit victory lane.  On the plus side, its not like he has to worry about Cole Custer taking his job.

43 LegacyMC ERIK JONES (Focus Factor, Air Force)—The addition of Jimmie Johnson is nice, but this team is still likely a year or two away from fighting for top-tens on a weekly basis.  Which means another year of Erik pretending to be a Raiders fan.

16 Kaulig AJ ALLMENDINGER (???)—Back to a full-time Cup schedule for The Dinger.  And back to rarely contending for wins outside of road courses and plate tracks. 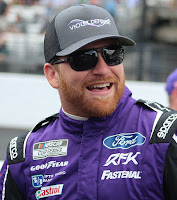 6 RFK Brad Keselowski (Kohler Generators, Esperion)—I’m thinking BKes knew this would be a long-term project to resuscitate the old Roush team into a contender, but judging by last year’s penalties he’s getting a bit anxious.

42 LegacyMC NOAH GRAGSON (???) R—We’re all likely thinking that it’ll be a tough transition to Cup for Gragson, going from a top-team like JRM to the mid-level (at best) former PettyGMS team.  Then again he might be easier to ignore wrecking people in 30th.

31 Kaulig JUSTIN HALEY (LeafFilter)—Does Haley have the talent to compete in Cup?  Probably, but he’s had few opportunities to show that outside this particular team.  He’s like Austin Dillon without the dumb cowboy hat.

47 JTG-D RICKY STENHOUSE JR. (Kroger, grocery stuff)—If spinning out on your own with about thirty laps to go got you bonus points, he’d be a Playoff contender.

34 Front Row MICHAEL MCDOWELL (Love’s, SpeedCo)—Being great at plate tracks is a little like being great at roulette—its better than being bad at it, but the skill set is a bit random. 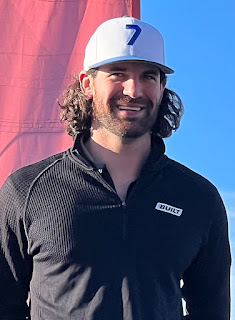 7 Spire COREY LAJOIE (???, NEGU)—This generation’s Kenny Wallace, especially since we typically only hear from him on a broadcast during a rain delay.

77 Spire TY DILLON (???)—I’m sure Ty’s a great guy, a decent human being, and has a loving circle of family and friends.  But how the HECK does he keep getting Cup rides?

38 Front Row TODD GILLILAND (???)—How long till he shows up at Front Row and finds Zane Smith being fitted for a seat in his car?

78 Live Fast B.JOSH MCLICKI (Motorsports Games, Ziegler)—BJ McLeod and Josh Bilicki are the likely main drivers this year.  Do you think Josh has to towel off the headrest in the car after BJ’s slicker than water hair has been resting against it?

15 Ware ??? (???)—How long till we hear that someone tangentially connected to Dodge is maybe possibly considering the option to buy this Charter?

51 Ware CODY WARE (Nurtec, ???)—Someone has to be last.  And that someone is almost always Cody Ware.

84 Legacy MC JIMMIE JOHNSON (???)—It’ll be cool to see a seven-time champ back in the driver’s seat, but no Chad Knaus means no wins.

62 Beard AUSTIN HILL (Beard Oil)—An annual reminder that Beard Oil is a petroleum distribution company, not something you put in your beard, you hipster.

Pack 4: A Driver from the Past, the Skill of Mast, and a Refractory Blast 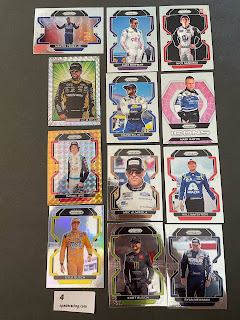 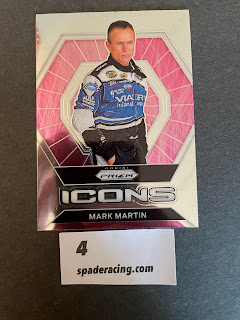 FIRST LOOK: Mark Martin—arguably the best driver to never with a championship, dominator of the Busch Series, one of the most-consistent and versatile drivers the Cup Series ever saw.  Oh, and, uh, LOL Viagra or something. 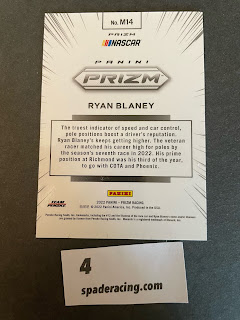 TO THE BACK: So pole positions are the true test?  Well then, give guys like Rick Mast and Loy Allen Jr. a slot in the Hall of Fame, pronto! 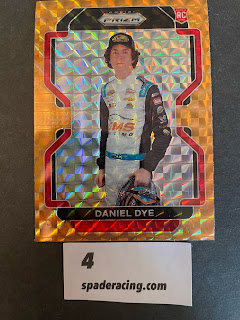 SAY WHAT: “Help!  This isn’t a card!  I’m really stuck in this holographic maze!”

RATING: 7 Special Paint Schemes out of 10

Nascar races on all sorts of tracks, from short to long, oval to road course, concrete to asphalt.  Here’s a weekly look at all the tracks of Nascar’s National Touring Series. 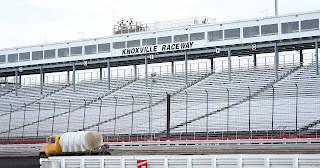 Nicknames: Sprint Car Capital of the World, The Track with the Late Start Time for Trucks

1. Knoxville Raceway’s Nascar history is quite brief (only since 2021) but the track’s is MUCH longer, stretching back to its introduction in 1878 as a horse racing track.  Yes, this track was opened in the 19th-century, making it almost as old as Morgan Shepherd.

2. This track is located in Knoxville, Iowa, not to be confused with Knoxville, Tennessee, where their mayor is a guy who used to pretend to be a burn victim on national TV.

3. The Truck Series moved here in an attempt to reconnect with the sport’s roo—ok, ok, you got me—they came here to spite Tony Stewart for starting the SRX Series.