Well, another year of racing is in the books (or, it would be if people still used physical Nascar Media Guides), which means that the offseason is finally upon us.  You remember the offseason—it’s when people stop complaining about how long the season is and start complaining about how short it is.  But even with no more racing to comment on, there will STILL be content o’plenty here at Spade Racing!  That’s right—check back for my weekly offseason updates on the super-secret fighting tournament held to crown a REAL champion!  There’s going to be lots of behind-the-scenes work on some awesome stuff you’ll see once the 2017 Cup season ramps up.  And just as sure as the awards banquet will suck, you can bet that any late-breaking news will be covered here as well.


Thanks for another great year of racing—now stick around for more!!!
Posted by Mike Mackler at 6:14 PM

For the first time EVER you can buy a piece of official Spade Racing merchandise—and it’s not just merchandise, it’s pop art!  That’s right, thanks to the good folks at Zazzle you can buy my art print, Stock Car Racing Cup Series Champions, in a number of sizes and mediums right now.  Updated through our most-recent champion, it features every “Cup” series champion’s paint scheme from 1949 through today rendered in “8-bit” style.  It makes a great decoration for your home or office AND makes a great gift for a fellow Nascar fan.  Order today and help the site!!!
Posted by Mike Mackler at 3:08 PM

Luminaries from the world of Nascar and motorsports at large flocked to Homestead-Miami Speedway on Sunday to witness the end of a magnificent career—that of three-time Cup Series champion Tony Stewart.  However, another ceremony was held for fellow retiring driver Brian Scott, one that was even sadder than you could ever imagine.
“I’d like to thank everyone for coming out tonight”, Scott said to the assembled conference room made up almost-entirely of empty chairs.  “It’s been a great run here in Nascar, and I’m glad to be leaving on my own terms.  Who’d have though that a scion of one of the most-powerful families in the western-US would ever get to live out his dreams?”
Scott’s prepared statement included numerous pauses, most-likely for when the assembled media would stand and applaud his words.  However, Scott instead stood in front of the “Getting Away Scott-Free” banner for upwards of seven seconds, waiting for standing ovations that never came, from a crowd that never arrived.
“Working my way up with some of the biggest teams in Nascar, guys like Gibbs, RCR, it wasn’t always easy”, Scott opined about the rides he acquired with family sponsorship and, eventually, lost due to lack of performance.  “But I knew that if I hung in there, people would notice.  And that’s what tonight is all about.
“OK, lets open it up for questions”, Scott said in a slightly-different voice, apparently trying to mimic a public relations rep of his that never arrived.  Scott then surveyed the sparse crowd looking for someone, anyone, to acknowledge his concluded racing career.
“Uh, yeah, so what do you think about Smoke retiring?”, said a local beat writer who, earlier, had complained about being asked to leave Tony Stewart’s retirement party due to order of the fire marshall.
“Oh, he was great, there’s no doubt, but I’m not here to talk about him, I’m here to talk about my future plans with my family business, opportunities in the marketing world, and poss…”, Scott then trailed off as the writer left the room.


Scott was later seen walking with his family to his hotel room, carrying a large box full of commemorative diecast cars. 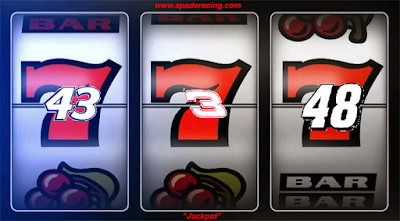 After his championship hopes were ruined in a vicious wreck with 10 laps to go, driver Carl Edwards declined the usual ambulance ride to the infield care center, choosing to walk there himself.  After touching base with the 22 team and crew and visiting the care center and being released, Edwards continued walking with no stop in sight.
“I just decided it would be better to walk”, Edwards said in full stride.  “That wreck was hard, but that’s no excuse to avoid getting in a good bit of exercise.”
Edwards had made his way outside the track by the time the race had gone back to caution after a red flag stoppage.  Nascar officials attempted to keep up with Edwards, but gave up upon realizing that he had no plans of stopping.
“I think I’m just going to keep walking for awhile”, Edwards told a reporter who had managed to keep up with him as he exited the track premises.  “I might just keep walking until the offseason is over.  Its not like I have a motorhome to go back to anyways.”


Eyewitnesses confirmed that Edwards was walking due-north, possibly in the direction of Daytona Beach. 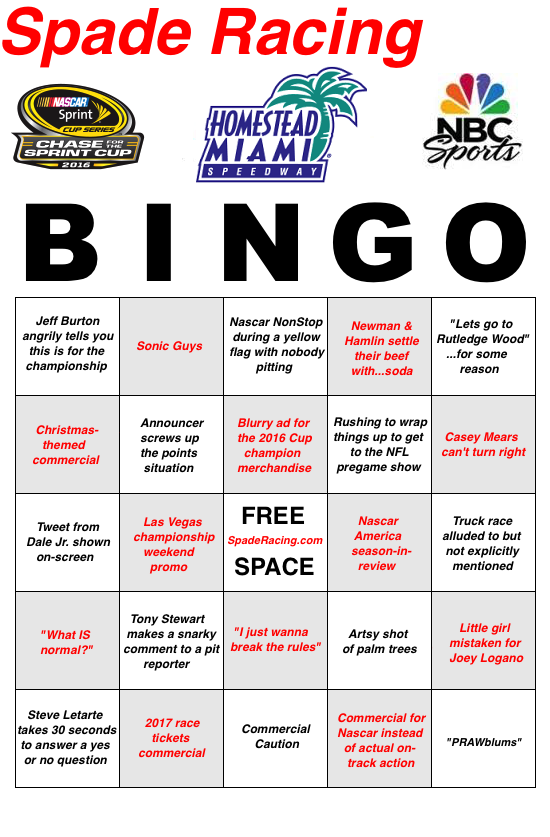 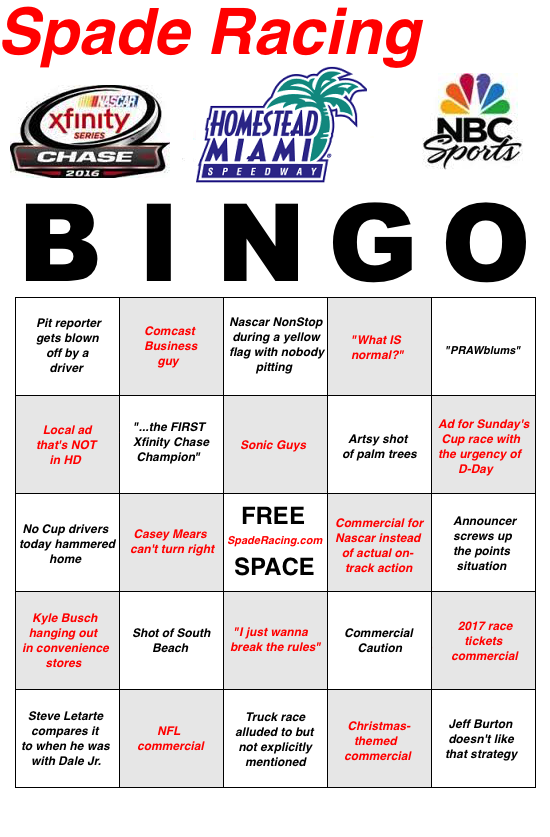 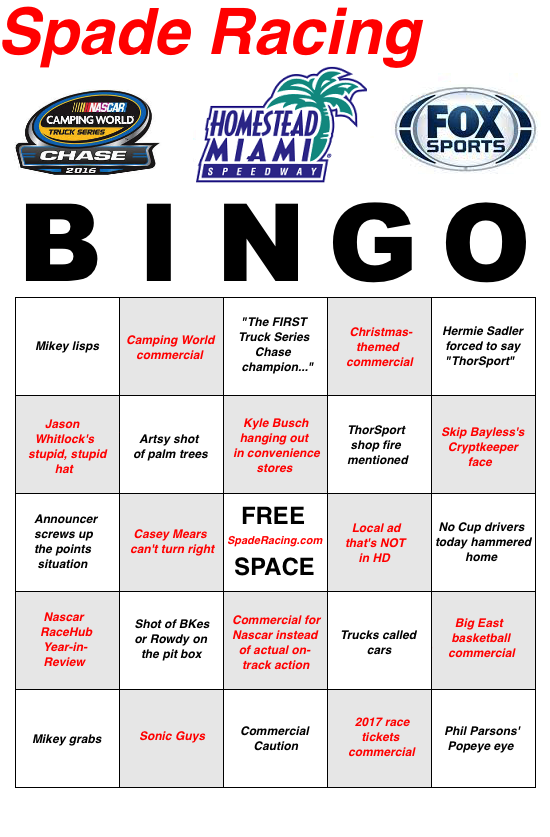 A nailbiter of a race at Phoenix International Raceway has been completed—now, here’s Spade Racing’s exclusive interviews with the Chase drivers who are IN for Homestead, and OUT for the season.

IN:
48-Jimmie Johnson: “Well, we got some pretty bad damage there in a wreck, but hey—what else can you expect when you’re racing around Austin Dillon and Greg Biffle.  We’ll go on to Homestead next weekend prepared for battle.  No, we’re not talking about the race itself as a ‘battle’, that would be silly—we’re all going to be carrying weapons to protect ourselves post-race if we tie Dale Sr. and The King’s seven championships.”
19-Carl Edwards: “Thankfully it was an uneventful race today, because I didn’t run it.  That’s right, I was pretty tired after that team hike a few days back so I decided to sneak Drew Herring into the 19 car with a Carl Edwards mask on.  It was a great chance to catch up on some email, check out that nice tapas place across the street, and heck, I was still able to get back by the checkers.”
22-Joey Logano: “WOOOOO!  We did it!  This is for more than just me, this is for everybody who ever drove the yellow-and-red 22 car—Ward Burton, Scott Wimmer, and especially Dave Blaney.  I’m standing on the shoulders of Bill Davis Racing giants today.”
18-Kyle Busch: “I’m just glad that this 18 team will be going for another championship next weekend.  Oh, and on a completely unrelated note, I’d like to introduce my newest addition to the Kyle Busch Motorsports lineup for 2017, Alex Bowman!”

OUT:
11-Denny Hamlin: “What can I say?  We had a shot today and we couldn’t deliver.  N-n-NO, don’t print that I said that!  Say that I said something else like, um, we lost it by a shave and a haircut…no wait, um, this was worse than Michael Jordan playing with the Wizards…no, um…”
20-Matt Kenseth: “Look, I think you all saw what happened out there today—we got screwed royally when we got wrecked.  I can’t believe other drivers would take it into their own hands to determine who would advance in the Chase.”
4-Kevin Harvick: “Huh, so this is what it feels like to be eliminated.  I dunno, kinda thought it would hurt more, or at least would feel different than usual.  I mean, don’t get me wrong, it sucks that we couldn’t advance, but I got the feeling it would be more different than this.” 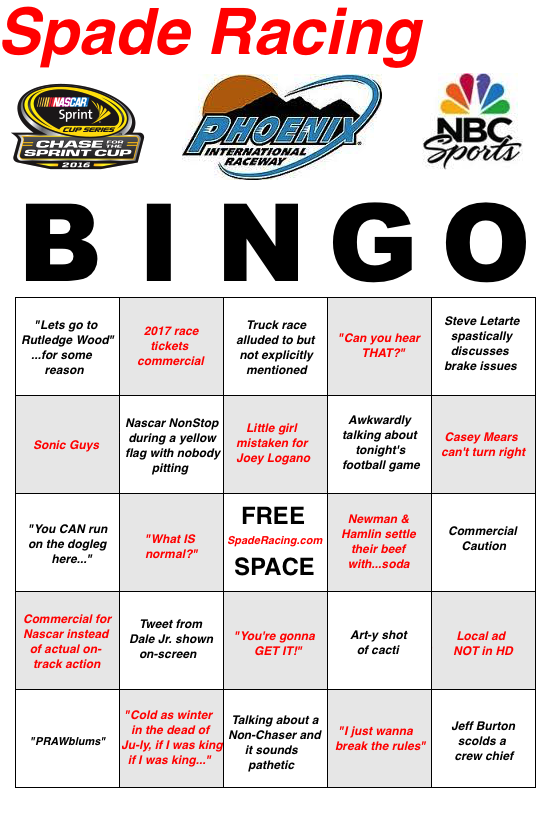 Sunday’s AAA Texas 500 was both delayed and abbreviated due to persistent rain in the area of Texas Motor Speedway.  The cause of the rain, according to a sampling of fans, was put squarely on Nascar Chairman Brian France.
“Damnit, France did it again!”, said race fan Christina Kynlyn shortly after the first rain storm began.  “This always happens now that that silver-spoon goof off Brian is in charge.  We never had problems like this when Bill (France) Junior was running the show!  And that reminds me—its Brian’s fault that Dale (Earnhardt) Jr. is out this weekend too!”
Fans from the track to the internet blamed the Nascar scion for Sunday’s precipitation, though it didn’t stop there.
“IDIOT BRIAN DOES IT AGAIN!” was the subject line of a message board thread started after the sudden conclusion to Sunday’s race.  “Anybody with half a brain would’ve moved the start-time up to 9am so we could’ve all watched it.  Figures that some stupid stuffed shirt like Brain (sic) would just let it rain like that.  Same with moving all the races to cable and letting Tony Stewart retire!”
For the real reason, Spade Racing went to meteorologist Lewis Norman for the actual cause.


“Well, rain comes from a warm or cold front passing through the area, bringing with it saturated air and lower barometric pressure”, Norman said, “however, its worth pointing out that whenever it rains in Indianapolis in the month of May, it’s obviously Tony George’s fault.
Posted by Mike Mackler at 2:47 PM 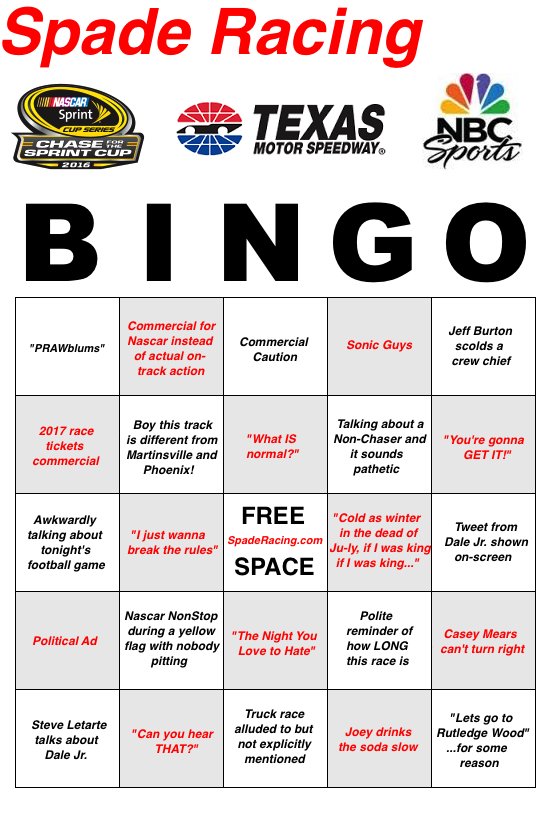 Images of the Nascar Scorers During Sunday's Never-ending Caution 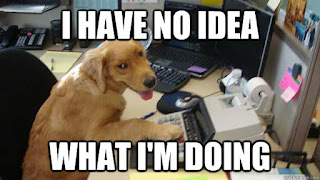 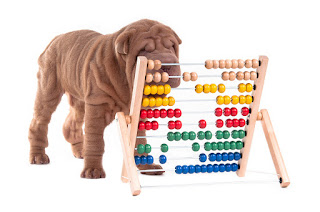 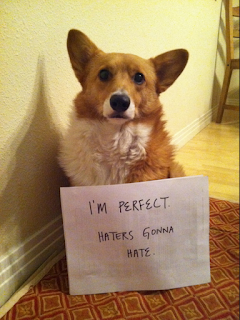