Just moments after winning his 10th Dover race with driver Jimmie Johnson, crew chief Chad Knaus shocked the racing world by announcing that he would be retiring at season’s end to replace Darrell Waltrip at Fox Sports, as fans’ dreams report.
“I really feel like I’ve accomplished everything that I can in this sport, and what better place to make this announcement than right here at a track we’ve dominated for so long”, Knaus said in most fans’ post-race fantasies.  “I’m so proud to announce that I’ll be joining one of my heroes, Jeff Gordon, in the Fox booth next year, replacing the ‘great’ Darrell Waltrip.”
Waltrip was sanguine after the announcement, which happened solely in fans’ unconscious minds.
“Well, it’s been a great run with Fox and Fox Sports 1, but I guess the cat’s let the cat out of the bag”, Waltrip declared.  “I’m three races away from finishing my time in the booth, but I know I’m leaving this place in good hands with Chad Knaus.”


Knaus’s announcement in fans’ dreams was then followed by Michael Waltrip loudly quitting on air.  Fans were reported to wake up shocked that Kyle Busch did a post-wreck interview, though sources report that this actually happened.
Posted by Mike Mackler at 4:53 PM

—A reminder that the Truck race is on TODAY (5:30pm EST to be vaguely precise), and YES there should be enough daylight to get it in, and YES it is aired live now.  And YES there is a reason to watch—no Cup guys!!!

—After punctuating his victory with a “Holy Guacamole!”, fans wait with baited breath to find out what Carl Edwards’ next sponsor-mandated celebration will be.  “We really raised the Bar-B-Que!”?  “I can’t believe we won—haha, just Rib-wich-in’ ya!”?  “Why do we have Jay Glazer as a spokesman?”?

—This is the first of four races in five weeks on Fox Sports 1, after which NBC & NBCSN take over coverage.  Sure, we’re all looking forward to it—until we remember that NBC brought us “Wally’s World”, a gigantic diecast car in the booth, and 30-second-long post-race shows (although they DID fire Bill Weber, so there’s that).

—In Xfinity news, Ty Dillon, Regan Smith, Bubba Wallace, and Daniel Suarez compete in the “Dash 4 Cash”.  Basically, the best-finishing of the four wins $100,000 and a clunky post-race interview.
Posted by Mike Mackler at 1:34 PM

It’s the time of the year when the temperatures rise, the tv shows go on break, and Hollywood releases its biggest and best movies to a theater near you.  Here’s a look at the coming movies with a Nascar bent:

San Andreas: A massive earthquake destroys California Speedway.  And nothing of value was lost.

Aloha: An in-depth documentary on the long-ago short-lived Nascar Hawaiian Series.  “The film did very poorly”.

Spy: Hendrick Motorsports and Penske Racing send an undercover marketing agent over to Joe Gibbs Racing in order to figure out the secret to getting so many logos on a single polo shirt.

Love & Mercy: The story of the Armed Forces Foundation BEFORE Patricia Driscoll took over.

A Pigeon Sat on a Branch Reflecting on Existence: Explaining to the public what exactly a “cat-bird” is and why its seat is important.

Jurassic World: Someone tries to start a series for retired racers.  Again.
Posted by Mike Mackler at 6:07 PM

Hey, what’s that you got there?

“A program for the Coke 600”
A 600 mile race?
“Yeahhhh”
That’s cool.
“Nooooo”
At Sprint, we cut your race length in half.
“I have a ticket for a race at Pocono”
Bring in your race, and we’ll give you all the action in half the time.
“I have a Miles the Monster trophy!”
At the Sprint Cut Your Race Length In Half Event, we’ll make it happen.  Unless, of course, you don’t want it to.

—This race used to be called the “World 600”, because in the 70’s the Southeastern US was pretty much the entire world to Nascar.

—Fox did a great job of getting everybody’s hopes up when they announced that Jeff Gordon was moving into the booth in 2016—then we realized that Larry Mac was the one moving down to the Hollywood Hotel.

—If you’d told me this a few months back, I wouldn’t have believed it, but yes: The Patricia Driscoll Story is getting even weirder.

—Congrats to the Nascar media for inducting a great group of people into the Hall of Fame.  And Bruton Smith.
Posted by Mike Mackler at 3:42 PM

After a duller-than-expected All-Star Race, Nascar has ramped-up its plans to make major rules changes for the 2016 season.  Here’s a few of the proposed changes to the cars themselves:

Limit interior decals in cars with in-car cameras to 35

Even brighter headlight decals for night-racing

Free Buescher with purchase
Posted by Mike Mackler at 5:04 PM

In a marquee event for the network, Fox Sports 1 provided night-long coverage of Nascar’s Sprint All-Star Race—one of the most-competitive in recent memory.  The network then followed the coverage by switching to Fox Sports Live, a SportsCenter knockoff hosted by two Canadian idiots.
“We are proud to broadcast one of Nascar’s most-popular events, the Sprint All-Star Race”, said Fox Sports spokesperson Megan Cara.  “As a broadcast partner, we think its necessary to provide only the best to this great race—incisive commentary, accurate coverage, and two Canadian idiots on a sports news show that nobody watches post-race.”
The Canadian idiots—formerly hosts of TSN’s SportsCentre program, which is surely a coincidence—consist of The Tall Guy and The Short Guy With The Stupid Voice.  Both are well-known for their goofy looks, their inability to deliver their copy without breaking, and zero respect for any non-traditional sports.
“We know that we’re not as established as ESPN, so we have to be DIFFERENT than ESPN”, said Cara.  “So we hired two Canadian idiots from another country’s version of ESPN’s signature show, and showed how different we can be by being generally worse and making zero pop-culture impact.”


In other news, Joe Gibbs was trying to find a polo shirt with even more logos on it.

With so much going on this weekend—and so much of it confusing—its easy to get discombobulated.  Here’s an event-by-event breakdown of Nascar’s All Star festivities (slogan: like the Pro Bowl, except the competitors care)

Sprint Showdown: Like The Showcase Showdown, Minus The Big Wheel
—Via Jayski, there are thirty drivers/cars entered into Friday night’s Showdown “preliminary event”.  Virtually anybody who’s attempted a points race this year is eligible, and virtually all those eligible are competing.  Here’s a quick list of who is NOT competing in the Showdown, and their reasons why: Ryan Blaney (philosophical differences), Ty Dillon (solving crimes), Ron Hornaday (plastic surgery), Bobby Labonte (working on time machine), Justin Marks (working on new “Marks Bros.” logo), Johnny Sauter (running truck race/ennui), Brian Scott (tattoo removal), Reed Sorenson (buying lottery tickets), Mike Wallace (pummeling Kenny), Michael Waltrip (interview with Ronco).
—The Showdown’s format is actually quite simple: there are two segments of 20 laps each (caution flag laps only count during the first segment, for some reason).  The winners of each segment advance to the All Star Race the following evening.  Immediately after the two segments are over, one of two things will happen: If Danica Patrick has NOT won one of the segments, she will be announced as the fan vote winner.  If Danica Patrick HAS won one of the segments, dozens of columns about how “Danica has arrived” will be published.

Sprint All Star Race: Formerly Special Paint Scheme Palooza
—The following drivers are eligible for the All Star Race—points-paying race winners from 2014 and 2015, previous All Star Race winners, and past Cup champions.  Drivers also have to had attempted to run a full series schedule the previous year, aka The Geoff(rey) Bodine Rule.  These drivers are joined by last night’s Showdown segment winners, and the Fan Vote Winner.
—The format of the actual event is surprisingly simple, with one notable exception.  There’s four 25-lap segments (in which all laps count), after which the Fox broadcasters’ heads will explode when trying to figure out the average finishing positions of those four segments—the driving order is then determined by average finishing position.  This is THEN followed by a mandatory four-tire pit stop (aka Time For Penalties On The 11 Car!)—the way the cars come off the pit lane will determine the running order for the final 10-lap, green-flag-only sprint to the finish.
—The winner gets $1,000,000, locks themselves into the All Star race for the foreseeable future, and gets to date the hot redhead in the Sprint “Stupid Rich Auction” commercial.

Xfinity Series Race: “Is this heaven?” “No, it’s purgatory, aka Iowa”

I alluded to a major update today, and here it is: The all-new reviews on Race Shop Reviews, my OTHER website.  Check it out, especially if you’re planning on taking a trip to the Charlotte/Mooresville area in the near future.
Posted by Mike Mackler at 4:49 PM

No post-race recap tonight…but there SHOULD be a major update tomorrow.
Posted by Mike Mackler at 11:45 PM

—Mother Nature, why do you hate NASCAR so much?!?

—I never thought we'd be putting Ryan Newman and Tom Brady in the same sentence, but here we are

—Keep an eye out for the multiple SpongeBob paint schemes this week, but remember that it's a Nickelodeon program--could the Wild & Crazy Kids 300 be far behind?

—FINALLY we have Truck Series racing tonight…well, unless it rains
Posted by Mike Mackler at 6:45 PM 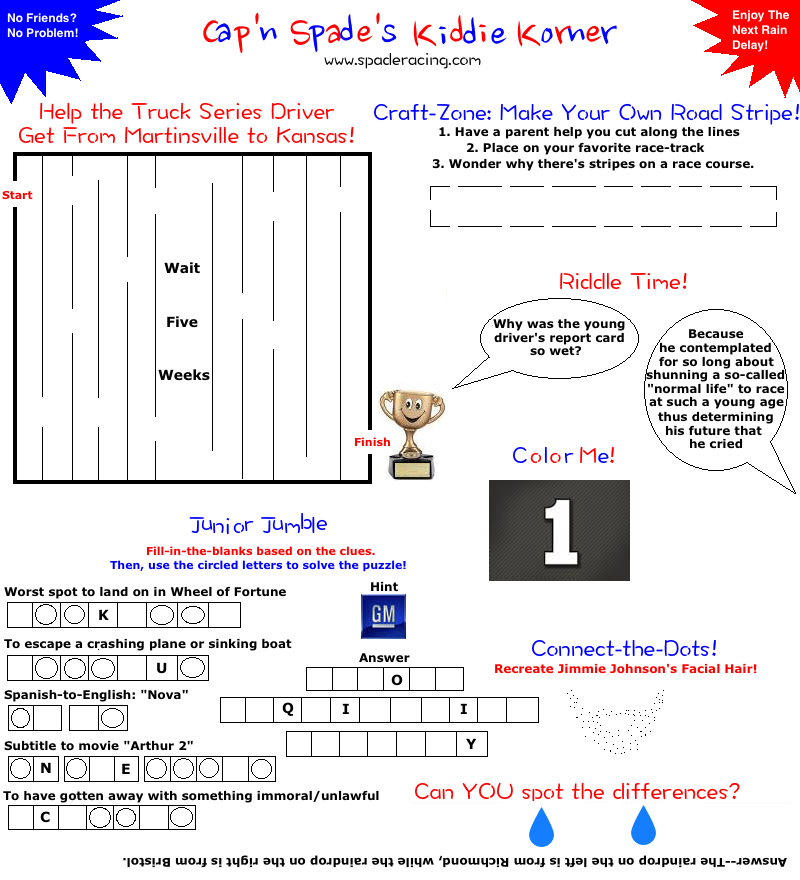 A Dale Earnhardt Jr. Commercial I’d Like to See

(Attractive middle aged woman lying on bed with a race-tire)
Woman: “Everyone likes to watch something exciting.  But I think most women would prefer to watch something popular.  The truth is, 48% of major sports programming suffers from Ratings Disfunction, or ‘RD’.  So if you’re having trouble getting YOUR ratings up, maybe its time to ask your series if a Dale Junior Win is right for you.”

Woman: Ask YOUR doctor if Dale Junior Win…is right for you.
Posted by Mike Mackler at 4:56 PM

—Yes, this week’s News & Notes is a bit late, but that’s because I was in Charlotte touring the race shops for my OTHER website, www.raceshopreviews.com.  Update forthcoming!

—After this weekend David Ragan moves into the 55 car for the rest of the season.  Erik Jones moves up into the 18 Cup car.  Brett Moffitt moves back to the 34 car vacated by David Ragan.  And Michael Waltrip returns to irritating us all.

—A reminder that both the Xfinity and Cup races are on your local Fox affiliate this weekend.
Posted by Mike Mackler at 1:15 PM