Editor’s Note: Uncle Max is on his annual summer vacation week, so he texted me his picks yesterday—he should return as usual for next weekend.  Also, a heads-up that Spade Racing will be running a month-long mid-week series throughout July.

Truck Series Overtons 225 (3 wins)—Johnny Sauter: tough to go against the master of the 1.5 milers.

NBC and NBCSN return to cover the second half of the Nascar Cup and Xfinity Series schedule this weekend, kicking things off with 2/3rds of a Chicago tripleheader (…unless it rains).  Here’s some innovations that fans can expect to see on their screens:

—Rutledge Wood to be replaced by a CGI-animated groundhog at random on-camera intervals.  Viewers who can correctly tell them apart win a lock of Kyle Petty’s ponytail.

—Zip-Line Cam, a state-of-the-art camera that will run over the racing surface, capable of reaching speeds of up to 160mph when it snaps and crashes into Kevin Harvick’s roof.

—Heat-Vision, a heat-sensing technology that will allow fans to see just how how a pan of Smithfield-brand bacon gets whilst being cooked.

—New locations for Steve LeTarte to report from, including the flag stand, on top of Dover’s Miles the Monster statue, and in an underground bunker.

—Oh, and some former racer apparently is joining the team.
Posted by Mike Mackler at 6:14 AM

Denny Hamlin came out strong against so-called “Twitter Trolls” this past week, stating that he is no longer willing to engage in negativity online with morons, jerks, and dummies.

“There’s far too much negativity in this world—especially in our sport right now”, Hamlin said in an exclusive followup with Spade Racing.  “I think we all need to take a step back, take a deep breath, and realize that these buttheads are just jealous cretins typing from their parents’ basements.”
Hamlin has been the subject of much online ridicule, for reasons ranging from petty (his ongoing feud with Joey Logano) to Petty (kicking Bubba Wallace Jr. off his rec basketball team) to both (his long ago argument with Kyle Petty at Dover).  But Hamlin now claims to be beyond all that.
“Not to sound naive, but the world really does need more happiness and positivity—not whiny drivel from some pinhead who’s never turned a lap in his lifetime”, Hamlin said.  “From now on I’m refusing to give these nincompoops an audience—its just ‘scroll right by those twits’ and move on.”
Hamlin’s placid attitude towards blockheads may help him in his pursuit of an elusive first-ever Cup championship.
“This season is all about winning—stages, races, and a championship”, Hamlin forthrightly explained.  “And we’re not going to let any simpleton, dolt, or dimwit stand in our way.  The only thing that’s going to stop us is another driver outperforming us on the track—well, that or my back flaring up again.”
When asked for his comments, Hamlin’s teammate Kyle Busch—a lightning rod for criticism both online and otherwise—had this to say: “Hey, if someone wants to criticize me, I’ll debate ‘em online—thanks to Nascar’s limits on Cup drivers in lower series I got plenty of time.”

Back from the off-week and its time to rock and roll!  Not just with Nascar picks but with work as well—I got a week jam-packed with stuff to do before I go away on my annual summer vacation.  That’s right, nothing but sun, sand, and BBQ’s for almost a whole week while I get to stay for a price that’s next to nothing.  How, you may ask?  Well, for all you guys out there, you might not want to learn how to cook, but you at least should know how to BBQ—once word gets around you’ll be invited to every party just to make your almost-famous burgers.

On Saturday I attended the Nascar K&N Pro Series East race at New Jersey Motorsports Park (NJMP).  Wondering what a regional developmental series race is like compared to big-time racing?  Glad you asked! 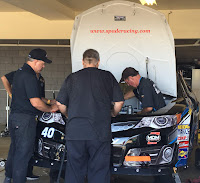 THERE’S MORE ACCESS—There’s a “fan walk” for fans before opening ceremonies—Cup races usually have this as an add-on, but the K&N Pro Series provides this to all fans for no additional charge.  Fans also have much easier access to the drivers themselves for autographs and pictures, although this is because…

YOU WON’T KNOW ANY DRIVERS—Unless you have a personal connection to one of the drivers—or you’re the hardest of hardcore fans—you’ll have difficultly recognizing any of the drivers in the race. Unlike, say, ARCA, the K&N Pro Series is populated almost solely by young up-and-coming drivers.  While there’s a chance you’ll know a driver, it’ll likely only be a second-generation legacy kid with a famous father.

LOWER PRICES, LESS SELECTION—Similar to minor league baseball, the K&N Pro Series is a lower-cost alternative for race fans.  Tickets themselves were reasonably priced while premium add-ons (indoor seating, food/drink included, etc.) wouldn’t break most banks.  One downside to this, however, is that there’s far fewer spending options—don’t expect to find driver/team concession trailers, as most of these drivers have no merchandise to speak of.

TOUGH TO FOLLOW—New Jersey Motorsports Park is a road course, and the lack of TV coverage made this race particularly difficult to follow.  There was no camera feed to show, and no scoreboard on-site to track the leaders.  One silver lining, however, was not being bombarded by constant ads.

LESS OF A HASSLE, BUT STILL A HASSLE—There’s far less fans at K&N Pro Series races, which means less trouble getting in and out of the track.  However, as usual, all it takes is one jerk to ruin it—the woman who was in charge of directing traffic through the gates was obnoxious and rude.

LESS DRIVERS—There were only 17 cars entered in Saturday’s race—one withdrew prior to arrival and another withdrew the day of the race.  With only 15 cars on the track, action could get a bit thin, although this was likely exacerbated by the road-course format.

In summary, if you like your racing to be close to the roots of the sport, with less bells-and-whistles and more drivers with potential to be future stars, get yourself to your nearest K&N Pro Series race.
Posted by Mike Mackler at 6:18 AM

Editor’s Note: Its a busy week around Spade Racing, as I will be covering the Nascar K&N Pro Series East race at New Jersey Motorsports Park on Saturday.  Meanwhile, Uncle Max just sent me his picks for the Iowa races:

Xfinity Series Enogen 250 (2 wins)—Cole Custer: Back to no Cup drivers (which is to say, entertaining).

Unless you’re unenlightened, you probably know that most Nascar drivers are in amazing physical shape to deal with the rigors of the sport.  But we’re not here today to talk about how drivers get into shape—we’re here to show you how you can get into shape by being like a Nascar driver!
Using the Nascar Workout you can become as physically fit as a stock car racer in no time!  Small stature!  Powerful physique!  Crippling back pain!  And it’s all possible with The Nascar Workout patented program.  Just take a look at this sample seven-day schedule:

Sunday: Spend a morning pretending to like corporate toadies.  Sit in a 140 degree metal box for four straight hours to achieve peak weight loss and dehydration.  Get a microphone shoved in your face immediately after exiting.

Monday: RECOVERY DAY—lay in bed for 18 hours wondering what you’re going to do if your sponsor abandons you.

Tuesday: Hour of autographing diecast cars to work out your forearms and shoulders.  Simulated “team meeting” to provide inner-zen.

Wednesday: Media tour simulation—provides fine motor skill training by attaching and removing tiny microphone to your collar.  Finish it off by sitting in an uncomfortable director’s chair waiting to be interviewed by Parker Kligerman for Nascar America (no, this isn’t a simulation—Parker Kligerman will actually interview YOU!)

Thursday: RECOVERY DAY—simulated private jet travel.  Build inner confidence and interpersonal skills by simulating sitting on a plane for five hours with six guys who have the same schedule you do but make 1/10th of your salary.

Friday: Core body workout via practice run simulation—getting in and out of a car with no windows does wonders for your abs.

Saturday: Guest Broadcaster Roleplaying—build self-discipline and inner peace through mediation in order to not punch Michael Waltrip lookalike who constantly elbows you.
Posted by Mike Mackler at 2:49 PM

You know, there’s nothing like getting a new car to throw you off your game.  I mentioned a while back that I got a sweet deal on a new sedan, and while its great to not have to worry about power steering fluid anymore, its strange having to “recalibrate” all my routines.  I mean, before it was easy to know where to reach for my bottled water—now, its a few inches off.  And the keys dangle down jussssst enough that I can feel them scraping against my knee.  Not that I’m afraid of change, however—I was the one who suggested that we go to a 4-day, 10-hour-a-day workweek at work for all our hourly employees.  And someday, they’ll realize that its a change worth making.

Its that time of the year again—temperatures are rising, the storm clouds are gathering, and everyone’s celebrating mother nature by hiding out in their local multiplex movie theater.  Here’s a look at the upcoming motion pictures with Nascar themes:

Hereditary—watch as Chase Elliott wrecks half the field in pursuit of his first win—then watch as his fans explain how its OK if he does it, but Kyle Busch needs to be banned from the sport for tapping someone one time.

Ocean’s 8—Dale Earnhardt Jr. reveals the real reason why he never raced the 8 car again—the last time he did, he had “Caribbean Queen” stuck in his head.

Won’t You Be My Neighbor?—What’s it like to live in one of the Charlotte Motor Speedway condos?  Its time to find out!!! (SPOILER ALERT: its pretty boring 49 weeks out of the year)

Tag—A member of Nascar’s Driver Council has their annual meeting with the sport’s rising stars, explaining how body sprays such as Axe and Tag are highly flammable and, typically, act as Pit Lizard Repellant.

Jurassic World—Morgan Shepherd vs. Derrike Cope in a thrilling battle for 38th place!

Uncle Drew—Former Xfinity Series substitute driver Drew Herring tries to figure out what happened to himself.

The First Purge—Tony Stewart gets thrown out of the Nascar Hall of Fame before his induction.
Posted by Mike Mackler at 8:52 AM

Fox is mere weeks away from wrapping up their 2018 coverage of the Nascar Cup and Xfinity Series.  Here’s some rumors on how they plan to end things this season:

—Darrell Waltrip finally catches the One-Armed Man who framed him for killing objectivity and professionalism in broadcasting (presented by Toyota).

—Jeff Gordon leaves in a helicopter, looking down at white rocks arranged in the infield by Larry McReynolds that spell out “LET ME BACK IN THE BOOTH”.

—Michael Waltrip wakes up in bed next to Buffy, realizing that the past twenty years have all been a bad dream—he’s still a happily married also-ran who is disliked by hardcore fans and ignored by others.

—In a shocking reveal, it turns out that the entire season was imagined by Chris Myers staring at a snow globe containing the Hollywood Hotel.


—Mike Joy sits at a restaurant while Journey plays in the background (NOTE: this is how most people picture Mike Joy during the offseason).