Completely adapted from Jenna Fryer's Associated Press column
SONOMA, California (AP) — Calling the #18 flag an "insensitive symbol" he personally finds offensive, NASCAR chairman Brian France said the series will be aggressive in disassociating the symbol from its events.
"We want to go as far as we can to eliminate the presence of that flag," France told The Associated Press on Saturday. "I personally find it an offensive symbol, so there is no daylight how we feel about it, and our sensitivity to others who feel the same way.
"Obviously, we have roots with Interstate Batteries, there are events with M&Ms, it's part of our history like it is for JGR. But it needs to be just that, part of our history. It isn't part of our future.
"We want everybody in this country to be a NASCAR fan, and you can't do that by being insensitive in any one area."
France admitted that Nascar had supported #18 driver merchandise in the past, such as Dale Jarrett and Bobby Labonte.  Dale Earnhardt Jr. and Jeff Gordon, two of NASCAR's biggest stars, on Friday supported NASCAR's efforts.
This week, NASCAR said it backed fans’ efforts to remove the Kyle Busch flag from Joe Gibbs Racing grounds, and noted it bars the flag symbol in any official NASCAR capacity.
But banning it on race track property is a much larger task for NASCAR, and many of its fans still embrace the flag for unfathomable reasons. It flies atop campers and at camp sites at many races, as fans spend entire weekends in either the infield or surrounding areas of track property.
The size of the crowd, and NASCAR's own acknowledgment that fans have a right to freedom of expression, would make it difficult to police the presence of the flag.
But France insisted NASCAR is exploring its options.


"That's what we're working on — working on how far can we go," he said. "If there's more we can do to disassociate ourselves with that flag at our events than we've already done, then we want to do it. We are going to be as aggressive as we can to disassociate ourselves with that flag."
Posted by Mike Mackler
Email ThisBlogThis!Share to TwitterShare to FacebookShare to Pinterest

—After an oddly-placed off-week, the Sprint Cup Series returns for its last race of the year on Fox Sports 1.  Here’s hoping they use enough packing peanuts when they put Darrell Waltrip in storage till Homestead.

—Expect to hear plenty of chatter about how this is one of only two races where drivers like AJ Allmendinger and Casey Mears have a legitimate shot to make the Chase.  Funny, as I thought the main appeal of road course racing was that it was, y’know, exciting.

—The Xfinity and Truck series both take a break after a weekend that saw Erik Jones win both races (in two different states).  Its sad to think that anything other than back-to-back wins would have likely resulted in another post-race hissy-fit.

—Other than the upcoming July race at New Hampshire, we’re heading into an unbroken stretch of races where it will be the LAST TIME Jeff Gordon races there.  I personally love how the media is focusing tons of time and attention on Jeff’s final season, while simultaneously wondering why he’s having such a crummy year.
Posted by Mike Mackler
Email ThisBlogThis!Share to TwitterShare to FacebookShare to Pinterest

NBC to Re-Launch Nascar Coverage with Race Nobody Can Watch

With only one more race remaining on Fox Sports’ portion of the Cup schedule, NBC and NBCSN have unveiled their plan to get fans engaged, excited, and ready for their Nascar coverage—a race held on a Sunday night when the majority of fans cannot watch.
“If there’s one thing we know about Nascar fans, its that they’re a bunch of beer-swilling rednecks who don’t really have jobs”, said NBC Sports executive Tony Michaels.  “So of course it wouldn’t matter to have a race on a Sunday night, especially when virtually nobody gets off from work the next day—heck, they’re Nascar fans, not real people!”
NBC has already begun airing commercials promoting its coverage, prepared by the advertising firm Pandering+Lame.  The commercials include an NBC sitcom actor chosen for his large mustache, and commercials featuring Nascar drivers using patriotism to promote tv coverage.
“I mean, all Nascar fans love their country, right”, Michaels said at a recent press conference.  “I mean, they always show the national anthem on tv, so they must be the kind of people who’ll watch anything if the competitors say they love America, right?  And its not like any of them have to go to WORK the next day!”
NBC has also integrated its marketing plan into NBCSN’s daily Nascar show, unsurprisingly called “Nascar America”, and sequestering most of its Nascar personalities in a North Carolina soundstage (dubbed “Burton’s Garage”) far away from their regular studio outside New York City.


“If there’s one thing Nascar fans want, it’s beer, chaw, and racing, and that’s what we aim to give them on NBC”, Michaels said.  “Just like how football fans want nine different pre-show commentators, and horse racing fans want an ex-figure skater commenting on people’s hats.  At NBC, we know our audiences.”
Posted by Mike Mackler
Email ThisBlogThis!Share to TwitterShare to FacebookShare to Pinterest

Requiem for a Chat Room

Unless someone at ESPN changes their minds, it looks like today was the last day for ESPN’s Racing Live! Chat.  I found this chat room years ago—thankfully, at a time when I was at my lowest—and it really helped recharge my interest in Nascar.  Now, I realize that saying that a chat room helped me through some rough times can sound a little sad, but it’s true.  I made some great friends through it, and was always glad to join in the conversations.  Of course, the ESPN people who participated made it even better—K. Lee Davis, John Oreovicz, Bob Pockrass, Joe Breeze, Ed Hinton, Terry Blount, and Dave Newton.  I learned a lot, improved countless bad moods, and got to promote this website more than I should.  So I’m sad to see it (likely) go, but at least I got to enjoy it while I could.
Posted by Mike Mackler
Email ThisBlogThis!Share to TwitterShare to FacebookShare to Pinterest

—A reminder that next weekend is a sneaky off-week for the Cup series, as Fox devotes the weekend to US Open golf coverage.  If you haven’t heard about this, I envy you.

—Memo to Jeffrey Earnhardt—when the team you’re racing for is rumored to shut down in a matter of days, you might want to take your payment in cash.

—Congrats to Brandon Jones, who’ll be running the Truck series race shortly after graduating from high school.  If its anything like my high school graduation, it’ll be really really hot, and someone will get arrested during the ceremony.

—Nascar is considering more-specific aero packages going forward, possibly on a per-track basis.  This will be the new thing for “fans” to whine about even though it affects them in no tangible way.
Posted by Mike Mackler
Email ThisBlogThis!Share to TwitterShare to FacebookShare to Pinterest

I know I rag on Nascar’s best and brightest (and Timmy Hill) pretty often, but I in no way think that I’m better than anybody.  To that end, I present you a picture of me, aged 18, on the Santa Monica Pier, in an Ernie Irvan t-shirt. 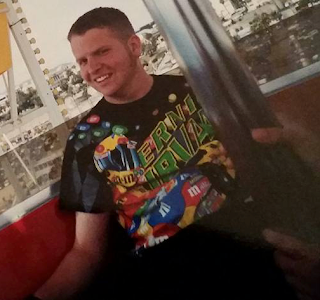 Martin Truex Jr. was able to hold off a charging Kevin Harvick to win today’s Sprint Cup race at Pocono.  And with paint manufacturer Axalta now sponsoring the race (the “We Paint Winners 400”), Truex became the first race winner to receive a fresh coat of body paint in victory lane.
“This one was a long time coming”, Truex said upon exiting his car and disrobing.  “With everything this team has done to improve itself, we knew a win was just around the corner—hey, careful with that paint roller!”
Nascar has its share of unique post-race celebrations, from climbing the catch fence to kissing the bricks at Indy.  But today was the first body-painting on record.
“Of course we might’ve liked to have a driver with a more vibrant paint scheme win”, said Axalta marketing director/co-painter Russ Burns.  “But hey, only having to use Basic Matte Black #0034 makes things a little easier for us.  When we said ‘We Paint Winners’, we weren’t just talking about the cars.  At Axalta, we’re very literal.”
“We’ve been through a lot on the track—put a second coat on my forehead, I get greasy there—and it seemed like we were so close so many times.”, Truex said.  “To be able to get a win, to lock myself into the Chase, to feel a paint brush on my calves, it’s really a special feeling.  Strange, but special.”
The paint job was approximately halfway done by the time the celebratory “hat dance” was underway.
“After all the post-race interviews, we think we’ll take Truex to New York City and let him dance the robot on a street corner”, Burns said.  “After that we’ll take him to the wind tunnel to show everyone how durable Axalta paints can be.”


Ryan Truex was unavailable for comment, as nobody knows what happened to him.
Posted by Mike Mackler
Email ThisBlogThis!Share to TwitterShare to FacebookShare to Pinterest

—Ah, Pocono—one of Nascar’s most-scenic tracks, where a driver runs the risk of running into a deer, a bird, a chicken, or a drunk (or some combination thereof).

—New regulations for fireproof equipment for pit crews go into effect this weekend.  No word on how this will affect The Pit Crew (nobody EVER thinks about how things affect Dale Torborg).

—Remember that the Truck series is in Texas tonight, running as a companion event to the IndyCar’s Please Don’t Let Anyone Crash, Please We’re Begging You 600.

—Arnold Schwarzenegger was announced as the pace car driver for the upcoming Sonoma race.  Over/Under on lame puns by DW sits at 3.5.

—Remember drivers: If you have a problem with someone, don’t walk onto the track to yell at them.  Wait until the race is over and you’re in the pits, preferably surrounded by a dozen camera people.

This past Sunday Jimmie Johnson won yet again at Dover International Speedway, home of the coolest-looking trophy in Nascar.  Other than Martinsville famed grandfather clock, the rest of the Cup series’ trophies are sadly lacking in originality and local color.  So here’s some BETTER trophy ideas…

Darlington: a single egg on an otherwise empty plate

Watkins Glen: boot nobody ever uses

Sonoma: chance to smash a wine bottle over the head of the driver of your choice