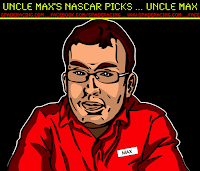 It's not just NASCAR that's doing well for me lately--my March Madness bracket is practically a lock to win! I was the only one at work smart enough to know to ride with Oregon AND UNC to the Final Four. Take THAT, Alice on morning shift who won last year by picking teams by their mascots!

Anyways, here’s my picks for the upcoming race weekend at Martinsville (total wins in parenthesis):

Cup Series STP 500:  FAVORITE (1 win)—Kyle Busch—do you really think that he’ll tolerate being the OTHER Kyle?  NEXT FAVORITE—Kevin Harvick—he’s due for a good run at a short track again.  DARK HORSE—Dale Earnhardt Jr.—it IS his favorite track, after all.