Stage Trophy Presentation More Pathetic Than You Could Ever Imagine

Atlanta Motor Speedway decided to present the winners of the first two stages with trophies, a presentation that was, somehow, even more pathetic than you could ever imagine.
“Wow, I didn’t know we’d be getting these—you really shouldn’t have”, Stage 1 winning crew chief Rodney Childers said upon being presented with the small chevron-styled award.  “Um, don’t take this the wrong way, but we’re pretty busy here, so can you just take the picture you need to take then let us do the rest?” 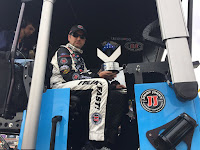 Childers awkwardly posed with the trophy for a few seconds before then explaining, in painfully-obvious annoyance, to driver Kevin Harvick why they hadn’t been able to discuss strategy for their upcoming pit stops due to the laughably lame “ceremony”.
“Yeah, I guess this is gonna be a thing now—we’ll have to deal with this all the time”, Childers said, his voice dripping with barely-concealed disdain.  “I can’t go into detail because we don’t have time, and besides the track’s PR guys are still hanging around me.”
Childers later gave the trophy to a low-ranking member on the team’s support staff, who put it in their hauler in a shelf usually reserved for extra spark plugs.
“We are so glad to be able to participate in a little bit of history—the first-ever stage win trophy presentation”, said a spokesman for the Atlanta Motor Speedway, unaware that he was doing something that would take away a piece of his very dignity.  “We’re all about doing things different here at Atlanta, like an Xfinity-Trucks doubleheader, and giving away trophies for what fans really care about—stage wins.”


Childers was later seen in deep conversation with a crew member shortly after winning the second stage, in theory to avoid having to cheapen himself further by accepting a second trophy.  He was heard telling the crew member that “…we already have enough doorstops already.”
Posted by Mike Mackler at 6:21 PM