23. Limited Edition “Pole Position” and a war of attrition 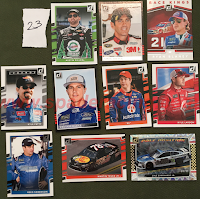 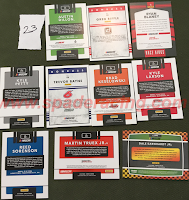 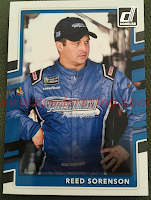 OVERVIEW:  I’m not gonna lie—its been pretty tough coming up with 24 different rhymes for each title in this series.  Guess I made the right move by not pursuing that free-style rap career.  Anyways, another nice combo of current talent here…and Reed Sorenson.
BACK OF THE CARD BONUS:  “BK” apparently went to the cliche store for his quote here—“They’re 500 miles, and a lot can happen”.  Guessing he said how he’d take it one race at a time shortly afterwards.
PICK OF THE PACK:  How do you write about a backmarker driver for a backmarker team?  Well, in Reed Sorenson’s case, you talk about how friendly you are with the team owner.  Really—what was he going to say?  “I can’t stand that guy, he never buys the kind of soap I like for the raceshop bathrooms”?
BONUS:  Dale Jr’s pole position at Daytona in July 2017 gets a fitting “Pole Position” card—one of only 99.  I wonder if this set was around when Ryan Newman was winning every-other pole—would they have about ten different cards for Mr. Friday?
FINAL RATING:  8 paint schemes out of 10

24. A middling run, some Menardburn fun, and we’re DONE 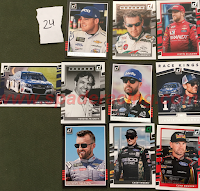 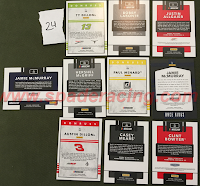 OVERVIEW:  The last pack is nothing special, though its nice to see Hershel McGriff get some love.  Both Dillons get some attention in this pack, as well as twice the Jamie Mac.
BACK OF THE CARD BONUS:  Casey Mears’s card includes an Auggie Vidovich reference—what are the odds?  Let me see…ah yes: 1 out of 1,434,509.
PICK OF THE PACK:  Paul Menard’s Daytona performance in 2017 is nothing to sneeze at with a pair of top-fives.  So there’s no explanation why his facial expression on his card could be best-described as “witnessing your favorite car get run over by a tank”.
FINAL RATING:  3 primary sponsors out of 10