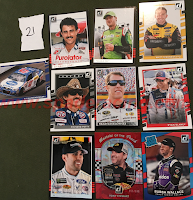 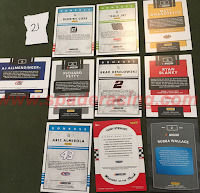 OVERVIEW:  Derrike Cope would you please leave now!  Other than Spanaway’s finest continuing to clog up this box, there’s a nice mixture here, including Official Cup Series Underdog Matt DiBenedetto.  Also, oddly enough we get the two most-recent drivers of the 43 car, along with the man who made it famous (no, not Dinger).
BACK OF THE CARD BONUS:  Matty D gets accused of using “…an old Willie Nelson tour bus”.  Ignoring the fact that this would be incredibly easy to prove or debunk, its fitting that Willie’s bus would be taken over by a guy from Grass Valley.
PICK OF THE PACK:  Bubba Wallace gets the “Rated Rookie” treatment in this pack, mentioning his strange streak of five-straight sixth-place finishes in the 2017 Xfinity Series season.  Thankfully they leave out how he lost his ride shortly after—Jack Roush apparently likes his Xfinity drivers to win at Daytona and lose everywhere else.
FINAL RATING:  7 charity events out of 10 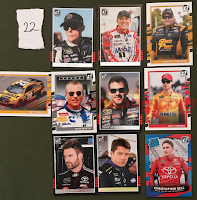 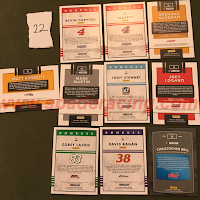 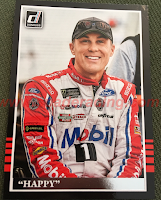 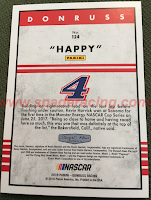 OVERVIEW:  This pack is REALLY across the board—everything from a pair of Kevin Harvick cards to proven race winners like Joey Logano and Mark Martin to Corey Lajoie and (limited edition) David Ragan.  We also get a contented look on Brendan Gaughan, which is how I’d probably look if I was the scion of a rich, powerful family with unlimited buffet comps.
BACK OF THE CARD BONUS:  “Rated Rookie” Christopher Bell gets his Truck Series exploits touted—well, through the start of the 2017 playoffs.  A pretty cool card to hold onto when you look at his career prospects, although it would’ve been nice of them to add in a quick “oh yeah he done good”.
PICK OF THE PACK:  “Happy”.  Funny, “Happy” is how I’d describe my general satisfaction with my life.