For years Nascar fans have been saying that the “Chase for the Cup” is not a valid way to determine the best driver in Nascar’s top series.  How, then, can we find out who truly is “the best of the best” in stock car racing?
That’s where Spade Racing comes in.
Taking inspiration from the WWF/E’s 1998 Survivor Series “Deadly Game” tournament to crown a new champion, we at Spade Racing have assembled the 15 greatest drivers in Nascar (…and Chris Buescher) in a secret underground fighting tournament to determine who really IS the best.
And now, here it is, the Spade Racing Silent But Deadly Game Tournament!

OPENING ROUND:
1. Martin Truex Jr. vs. 16. Chris Buescher
RECAP: Well, this was really the biggest mismatch on the card, for sure.  Truex came into this match with a head of steam, all the inspiration in the world, and strong backing as part of The Camry Alliance.  Buescher, well, he just kind of came in here, after winning a battle royale for the final slot the night before when he hid the corner while the rest of the competitors punched each other out.  Truex made quick work of the rookie with a flurry of expert punches and holds, finally getting Buescher to tap out to his signature hold, “The Furniture Row No-Go”.  WINNER: Martin Truex Jr., 3:04 SUB.

8. Kurt Busch vs. 9. Denny Hamlin
RECAP: Arguably the most-hotly-contested match in the opening round saw the controversial former champion Kurt “The Former Outlaw” Busch take on “Dangerous” Denny Hamlin, arguably the best competitor here to never capture championship gold.  The match was a classic see-saw battle, with Busch using his veteran savvy to batter Hamlin’s weakened injured body parts (which is to say, all of them).  Hamlin was able to mount a comeback with some classic chain moves, however, eventually maneuvering into the position of power, wearing Busch down Kurt constantly scanned the crowd for possible snipers.  After applying his finisher, the FedEx Flyer, however, Busch was able to kick out at two and stage a comeback of his own, eventually landing his OWN finisher, The Monster Mash, and picking up the 1-2-3.  The crowd showed their appreciation for the hard-fought battle, chanting “This-Is-Awe-some”, then informing Bill Elliott that it wasn’t always about him.  WINNER: Kurt Busch, 14:01 PIN.

4. Matt Kenseth vs. 13. Tony Stewart
RECAP: A pair of wily veterans took each other on in arguably the highest-stakes match of the night, in which mutually agreed upon stipulations saw Tony “Smoke” Stewart put his career on the line in exchange for Matt “Robot” Kenseth agreeing to kiss Joey Logano’s feet if he lost cleanly.  While both competitors came out like a house of fire, Stewart’s badly-injured back and lack of conditioning began to show, allowing Kenseth to take control of the match within a matter of minutes.  Eventually Stewart attempted his finishing move, The (im)Mobil 1, far too early, allowing Kenseth to reverse it for a small package and the victory.  Stewart then left the arena to a standing ovation from the crowd, pausing only to flip off the assembled media.  WINNER: Matt Kenseth, 6:59 PIN.


RECAP: Joey “GoGo” Logano is no more, having officially completed his “Heel Turn” in the months leading up to the tournament, now going by the name Joey” GoLow” Logano.  Austin Dillon was next in line for The Connecticut Motor Oil-Blood’s dastardly ways, as the third-generation star was battered and bruised early and often.  Dillon was barely able to get in a bit of offense, but Logano still used the ropes as leverage to score the pin after his finishing move, The Pennzoil Plunge.  Dillon was helped from the ring by his family members before Logano was able to use a bottle of spray paint to “…fix that spot on his hair”.  WINNER: Joey Logano, 7:23 PIN. 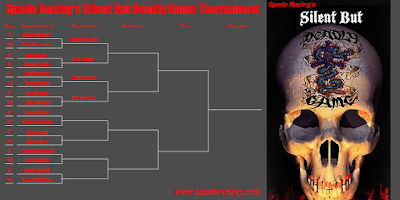