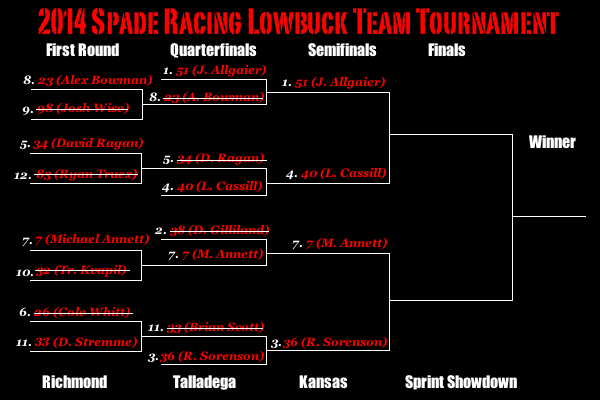 Nascar's most-unpredictable track led to some unpredictable finishes in the Lowbuck Team Tournament's Quarterfinal Round--here's the results:
1. 51 (Justin Allgaier) over 8. 23 (Alex Bowman)--What was expected to be a blowout turned into a knock-down, drag-out fight between the two rookies.  In the end, The Boys from Brandt eked out a win over the Pepper Posse by a single position.
4. 40 (Landon Cassill) over 5. 34 (David Ragan)--Last year's Talladega Winner was not able to conjure up any magic in 2014, as Cassill's 11th-place finish easily beat Ragan's 35th-place run.  The KFC Go Cup had no comment on the loss.
7. 7 (Michael Annett) over 2. 38 (David Gilliland)--The cinderella story continues!  Annett scored a solid 16th-place spot, while Gilliland saw engine trouble relegate him to 40th.
3. 36 (Reed Sorenson) over 11. 33 (Stremme/Scott)--Even a switch in drivers, extra support from RCR (which nearly got them disqualified, by the way), and a pole position couldn't help Idaho's finest, who finished second-to-last, while Sorenson came home in 34th, albeit with no free food.
Here's the Semifinals (at Kansas Speedway this Saturday):
1. 51 (Justin Allgaier) vs. 4. 40 (Landon Cassill)
7. 7 (Michael Annett) vs. 3. 36 (Reed Sorenson)
Posted by Mike Mackler at 3:37 PM