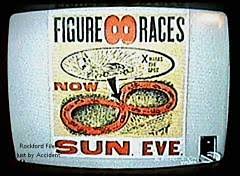 After numerous complaints from fans and drivers alike, International Speedway Corporation (ISC) has announced that it will renovate and revamp Talladega Superspeedway into a "Figure-8" Layout in time for the fall race.
"Much like our corporate brethren at Speedway Motorsports Inc. (SMI), we've decided that the only thing better than a measured, open approach is a rushed, knee-jerk reaction.  So rather then work on the track itself, we've decided to completely re-do it.  Figure-8 racing, here we come!"  said SMI executive/Selena Gomez fan Brian France.  "Excitement is what fans want.  And what's more exciting than 43 cars trying to avoid crashing into each other for 4 hours?"
Bulldozing of the massive infield has already began, with contractor representatives saying that the laying of asphalt should begin by early June.  The highly-banked turns will not be affected, nor will the start-finish line located at the end of the tri-oval (as mentioned about 50 times every televised race).
France explained.  "In this sport, you have to listen to two constituencies--the competitors and the fans.  We obviously heard what former champion Tony Stewart had to say.  And when I approached fans after the race, I got all sorts of reactions.  Some went 'Woooo!', while others went 'You suck!'.  But the overriding request was to '…please lower the cost of going to a race', which means one thing--change the layout now!!!"
Costs for the changes are expected to be incurred by fans, who will now be forced to pay a $20.00 Please Stop Complaining Surcharge on all ticket purchases.  In addition, all drivers who make it through a race without wrecking will have 10 percent of their winning donated to the Jimmy Spencer Let Idiots Race Fund.
When asked for comment, Stewart responded "DON'T YOU KNOW SARCASM WHEN YOU HEAR IT?!?", then was promptly fined for actions detrimental to stock car racing.
Posted by Mike Mackler at 12:49 PM