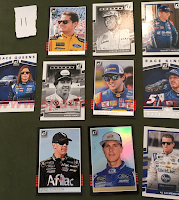 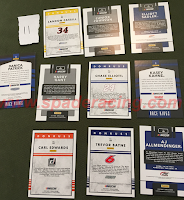 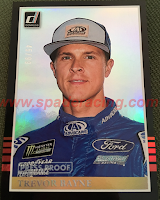 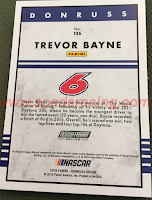 OVERVIEW:  One of the weakest of all the packs so far gets rescued by the inclusion of Junior Johnson (and the glare from my overhead lamp), a legend if there ever was one.  We also get Carl Edwards—I wonder if Donruss/Panini included so many Cousin Carl cards in case he decided to go racing again this year?

BACK OF THE CARD BONUS:  Harry Gant gets called “A thinking man’s driver”, which is ironic since I’ve always wondered “What was he thinking?” whenever i see someone chewing Skoal.

PICK OF THE PACK:  One of 99 Trevor Bayne “Press Proof” cards in which he appears to be standing in front of a hologram.  I don’t know why you’d need 99 press proofs of a card, but maybe they wanted to make sure they captured Trevor’s boyish charm just right. 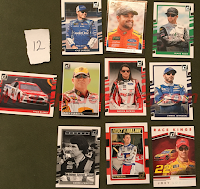 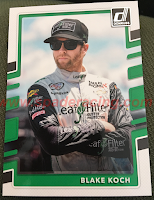 OVERVIEW:  A real mixed bag here, including a picture of Kyle Larson looking like he’s happy not to know what to do with his hands.  Also we see Ty Majeski get a shout out as “Next in Line”, a reference to Nascar’s “Nascar Next” program used to promote drivers from lower series.  The hierarchy seems to go “Legends”, “Race Kings”, “Rated Rookie”, “Next in Line”, followed I’d guess by “Ones to Watch” and then “StarCom Racing”.

BACK OF THE CARD BONUS:  Danica talks about her goal to win in the Cup Series.  Kinda sad looking back on it now, although she DID accomplish her secondary goal of becoming rather irritating towards race fans in two different series.

PICK OF THE PACK:  Alright, Blake Koch!  Nothing like getting a driver on the rise!  I’m sure this’ll be worth som—what’s that?  He’s not racing anymore?  Oh, uh, well, what’s he up to nowadays?  Running a filter delivery service?  Oh, um, okay…

FINAL RATING:  5 contingency decals out of 10
Posted by Mike Mackler at 12:28 PM